Limbering up at the Marseille Test Event The Test Event for the Bullitt GC32 Racing Tour, taking place next week over 20th-26th April, will see a gathering of the GC32 clans

Limbering up at the Marseille Test Event

With new teams, new sailors, new race management and officials joining in the 2015 Bullitt GC32 Racing Tour, those involved will be taking part in a Test Event in Marseille, France over 20th-26th April.

Next week’s Test Event is hosted by Sirius Events, organisers of Marseille One Design, the last event of the 2014 season and which will again be the grand finale of the 2015 Bullitt GC32 Racing Tour. The city of Marseille generously hosts the GC32s as part of its build-up to being European Capital of Sport in 2017.

At present competitors on the Bullitt GC32 Racing Tour have varying experience from old hands such as GC32 Founder Laurent Lenne and his Team SPAX Solution along with Flavio Marazzi’s ARMIN STROM Sailing Team – who have both been racing their GC32s since 2013 – to brand new teams to the class like two time America’s Cup winner Ernesto Bertarelli’s Alinghi and his sister Dona and Yann Guichard’s Spindrift racing.

To level the playing field, the Test Event, held out of Marseille’s Roucas Blanc Marina, will provide crews with much needed training time. The schedule includes four days (23rd-26th April) when teams will carry out practice starts, speed testing as well as some full blown racing. It will also be a test for the Bullitt GC32 Racing Tour race management team including PROs Anne Mallédant-Vadré and David Campbell-James and Chief Umpire Miguel Allen. 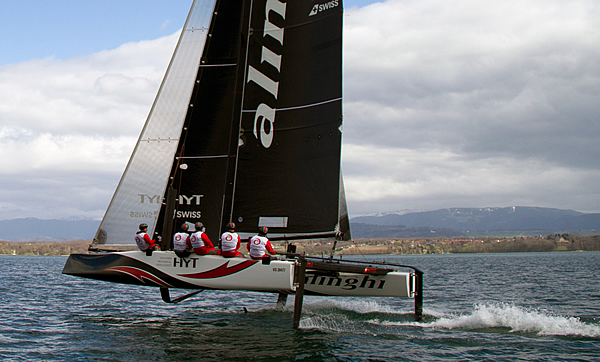 Wednesday 22nd April will be a day ashore for everyone with some vital meetings and briefings. This will include a rules session run by David Campbell-James and GC32 Class Association Technical Director Christian Scherrer, plus the opportunity to meet the Tour’s new sponsor, Bullitt Group, the UK-based company, which designs, manufactures, markets and sells consumer electronic devices in partnership with global brands.

As GC32 catamarans are among the fastest boats on the water, safety is a paramount concern and there will also be a workshop examining safety procedures and best practice.

Among those taking part in the Test Event will be Sebastien Rogues, who has made the jump from Class 40 shorthanded offshore racing to foiling catamarans as skipper of GDF SUEZ. Rogues first competed in his GC32 at Marseille One Design last year: “With Bertrand Castelnérac, Sébastien Col, Christophe Carbonnières and Julien Villion, we started training on our GDF SUEZ GC32 in February,” Rogues says of his program so far this year. “With our coach Pierre-Alexis Ponsot, we have been working on our manoeuvres and looking deeply at the boat’s technical features. Since the GC32 is new for everyone, we put a lot of energy into optimising our ‘flying’. It has been really enjoyable, because we find we can easily sail at more than 30 knots, which is an incredible sensation!”

With regard to the Marseille Test Event to the Bullitt GC32 Racing Tour, Rogues adds: “I took part in my very first GC32 event last year on this fabulous bay, so I am very much looking forward to returning to Marseille for the Test Event.”

Alinghi is the latest team to receive its GC32 from its builders, Premier Composite Technologies. Mainsheet trimmer Pierre-Yves Jorand commented: “GC32 sailing has been great so far – we have only had four days of sailing in 8-14 knots of wind, but the first foiling feeling has been huge!

“We are really excited to attend the Marseille Test Event next week because obviously we expect some good breeze so we can get in some nice downwind foiling and we will try to beat our speed record which currently stands at 29 knots. We are also thrilled to be part of this circuit. We are on a steep learning curve but are looking forward to learn great lessons.”

Spindrift racing will also be taking part, as skipper Yann Guichard explains: “The GC32 Racing Tour has invited Spindrift racing to the Marseille warm-up. As we are currently waiting for delivery of the boat that we will use once the season officially starts in Austria in May, they have and have lent us a boat to sail for this occasion. So we’ll be performing our GC32 maiden voyage in Marseille.

“The GC32 is not just any new boat, it’s one that flies, making it quite a challenge for the team. We’ll also be facing some of our future rivals in a format which is similar to the regattas we’ll sail over the course of the year.

“We’re aware that some of these teams have already done plenty of training. It doesn’t take long to learn how to foil stably and in a straight line, but when racing it’s a different ball game. Races will be won and lost in the manoeuvre and the transition phases when you can lose a lot of ground. We’ll be taking things slowly, step by step, making sure we do everything correctly.

“I think back to when I started racing the AC45 class in the America’s Cup World Series in 2011, and I had to tame the wing. You always feel a mixture of excitement and apprehension when you discover a new way to sail and that’s how I feel now: It’s hugely motivating, both for me at the helm and for the rest of the team.”

On behalf of organisers Sirius Events, CEO Manfred Ramspacher welcomed the Bullitt GC32 Racing Tour family back to Marseille: “Marseille’s Test Event is yet another confirmation of all the enthusiasm the city of Marseille has for the Bullitt GC32 Racing Tour, which is a result of the initiative of the City Council’s Maritime Director, Didier Reault, and Sirius Events.

“Before Marseille One Design to be held over 30th September to 3rd October, the Test Event will allow us to fine tune our organisation, while the racing teams will be able to warm up for the five events to come this season around Europe, with Marseille being the grand finale. It will be a great pleasure to watch the GC32s racing again on the Rade de Marseille next week.” 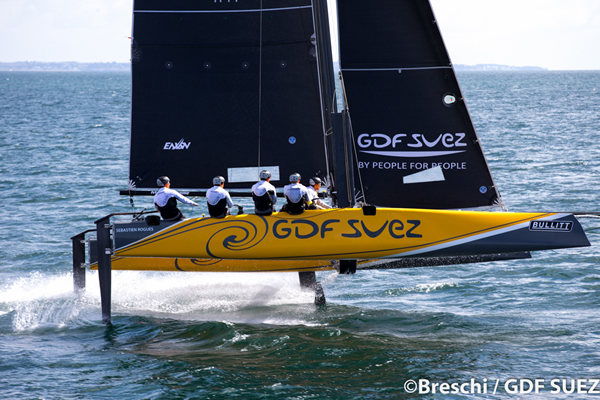