Among the 10+ teams due to contest the GC32 Racing Tour in 2019 will be two of sailing’s most high profile.

Following lengthy tenures on the Extreme Sailing Series, both Alinghi and Red Bull Sailing Team have joined the GC32 Racing Tour, now it is the sole circuit offering competition on the high performance, fully foiling GC32 one design catamarans.

Ernesto Bertarelli’s Alinghi is famously a two time winner of the America’s Cup, and the first ever winner of sailing’s premier event in Europe. The Swiss team’s record on the Extreme Sailing Series was unparalleled, winning it four times, including the 2018 season, and finishing runner-up twice. Red Bull Sailing Team made it on to the Extreme Sailing Series podium in 2013, 2015 and 2016.

“We are very excited to return to the GC32 Racing Tour, which we haven’t raced in since 2015, and look forward to discovering new venues, race formats and opposition,” states Alinghi Team Director Pierre-Yves Jorand. Aside from having one of the most experienced multihull sailors as an owner in Ernesto Bertarelli, Alinghi has also benefitted from having a finely tuned crew that has grown and developed together over multiple formats over the course of more than a decade. Most recently Swiss powerhouse Bryan Mettraux, a previous GC32 Racing Tour crew with Team Tilt and Realteam, has come in for Nils Frei who remains with the team, both in reserve on the crew, but also taking-up a new position as a coach. “Bryan is strong and smart. He is basically a trimmer but he is an all-rounder – very comfortable in any position,” explains Jorand. The team also includes Yves Detrey, Nicolas Charbonnier and Timothé Lapauw.

As to the enlarged competition this year following the merging of the two GC32 fleets, Jorand says it is interesting: “On the one hand you have strong teams used to the GC32 Racing Tour, like NORAUTO, Argo and Zoulou, who know the race courses, the formats and the venues. But then you have the ex-Extreme Sailing Series teams who have experience doing many, many races. We can expect tough competition throughout the year.”

Sharing helming duties with Ernesto Bertarelli during the season will again be Arnaud Psarofaghis. He observes that while the GC32 Racing Tour typically has longer courses, Alinghi is used to these from sailing the D35 catamaran circuit on Lake Geneva. “That will make the dynamic a little different because it will mean the game will be more about boat speed than boat handling. So we have been working on that over the winter.”

While Alinghi has spent more than two weeks training in Villasimius and has past experience of Riva del Garda and Palma, Psarofaghis says Lagos, where the 2019 GC32 World Championship will be held over 27-30 June, will be new for them. 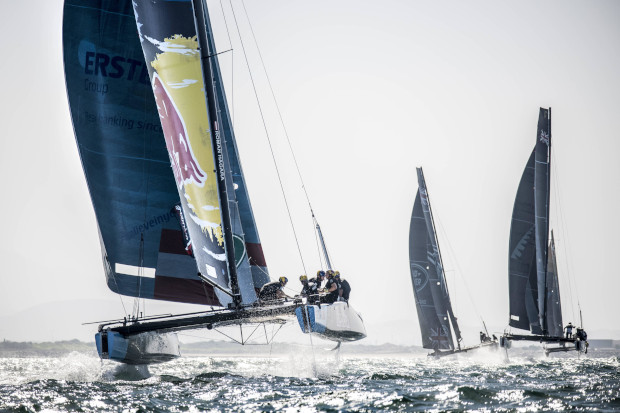 Red Bull Sailing Team has been run from the outset by two legends of Austrian sport, Roman Hagara and Hans-Peter Steinacher, the Tornado catamaran gold medallists from the Sydney 2000 and Athens 2004 Olympic Games, when on both occasions they were one of Austria’s two gold medal winners.

Having taken a brief sabbatical, both Hagara and Steinacher are back on board Red Bull Sailing Team. “We sailed the last two events in 2018 and were quite successful,” recounts Hagara. “We finished second at the last event in Mexico and we try to continue that this year – we are looking forward to the season.”

Rhys Mara returns as trimmer and is joined on board by fellow Australian Mark Spearman and Swede Julius Hallström who respectively sailed with INEOS Rebels UK and SAP Extreme Sailing Team on the Extreme Sailing Series last season.

“It will be definitely be an interesting season this year,” continues Hagara. “The fleets from the two circuits are combined now and there are some really strong teams including Alinghi, which won the Extreme Sailing Series last year and from the GC32 Racing Tour, there is NORAUTO, the French America’s Cup team and also INEOS, the British America’s Cup team. It will be good competition.”

As to the venues the GC32 Racing Tour will visit in 2019, Hagara says he is most looking forward to the fourth event of the season: “Our favourite is Riva del Garda. Lake Garda is known for its really good wind. We hope to set a new GC32 speed record there.”

Further team announcements will be made over the next weeks.