Maris clings on to the lead after three more races in Villasimius From some time out, day two of the GC32 World Championship in Villasimius, Sardinia was looking set to be tough, with light winds forecast. After one false start early on today, the fleet was returned to the Marina di Villasimius and it was only thanks to the perseverance of PRO Stuart Childerley and his valiant […] 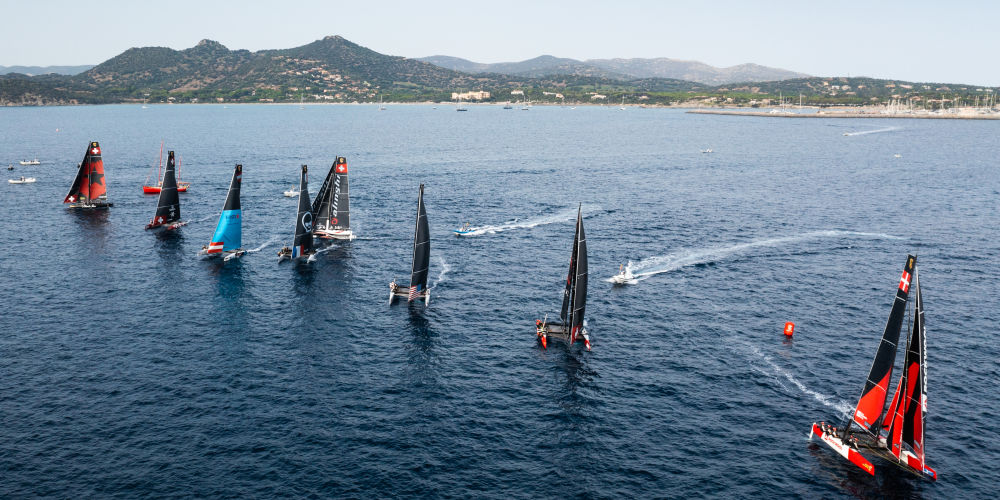 From some time out, day two of the GC32 World Championship in Villasimius, Sardinia was looking set to be tough, with light winds forecast. After one false start early on today, the fleet was returned to the Marina di Villasimius and it was only thanks to the perseverance of PRO Stuart Childerley and his valiant race committee, that when the southwesterly breeze finally filled in late in the afternoon, three races were held, the first only starting at 1630 CEST.

Remarkably at the halfway stage of this third ever GC32 World Championship, after four races just three points separate the top five boats. Additionally, the overall leader is not a seasoned pro, an America’s Cup winner or an Olympic gold medalists, but French owner-driver Erik Maris and his Zoulou team.

Maris won yesterday’s race and that he continues to lead confirms the depth of skill and knowledge within his Zoulou team – which is the oldest on the GC32 Racing Tour. Today Zoulou scored a 6-3-2.

“We are not all that bad and for now we are in the mix with the five boats most likely to win it,” said Maris, keen not to make much of Zoulou’s lead at this stage. “We have a little margin on our friends from Argo for the owner-driver [trophy], but that is all I can say for now…” Maris added that he had been worried earlier that they might not get any races in. He praised the race committee for making the right calls.

Aside from America’s Cup winner Thierry Fouchier, on Zoulou is tactician Thomas le Breton who said that his job today was made much harder due to racing so late. “It was not easy – you never knew when the wind would shift. I prefer it when you can see the gusts. It was good – we are happy to be in the first league, but we are not looking too much at our overall results yet.” 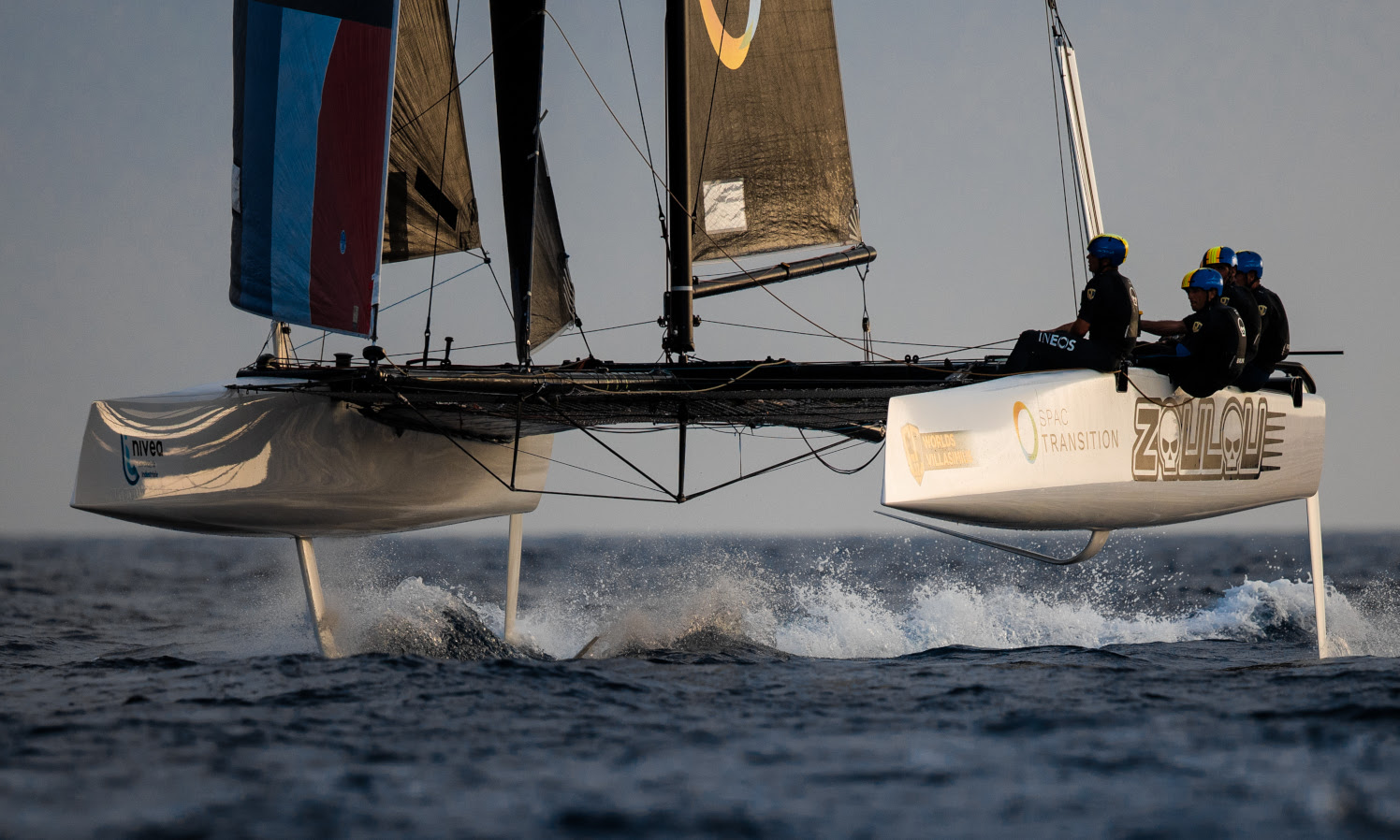 Above: Erik Maris’ Zoulou has held on to the lead at the end of day two. Below: Christian Zuerrer’s Black Star Sailing Team was the top scoring boat of the day. Photos: GC32 Racing Tour / Sailing Energy. 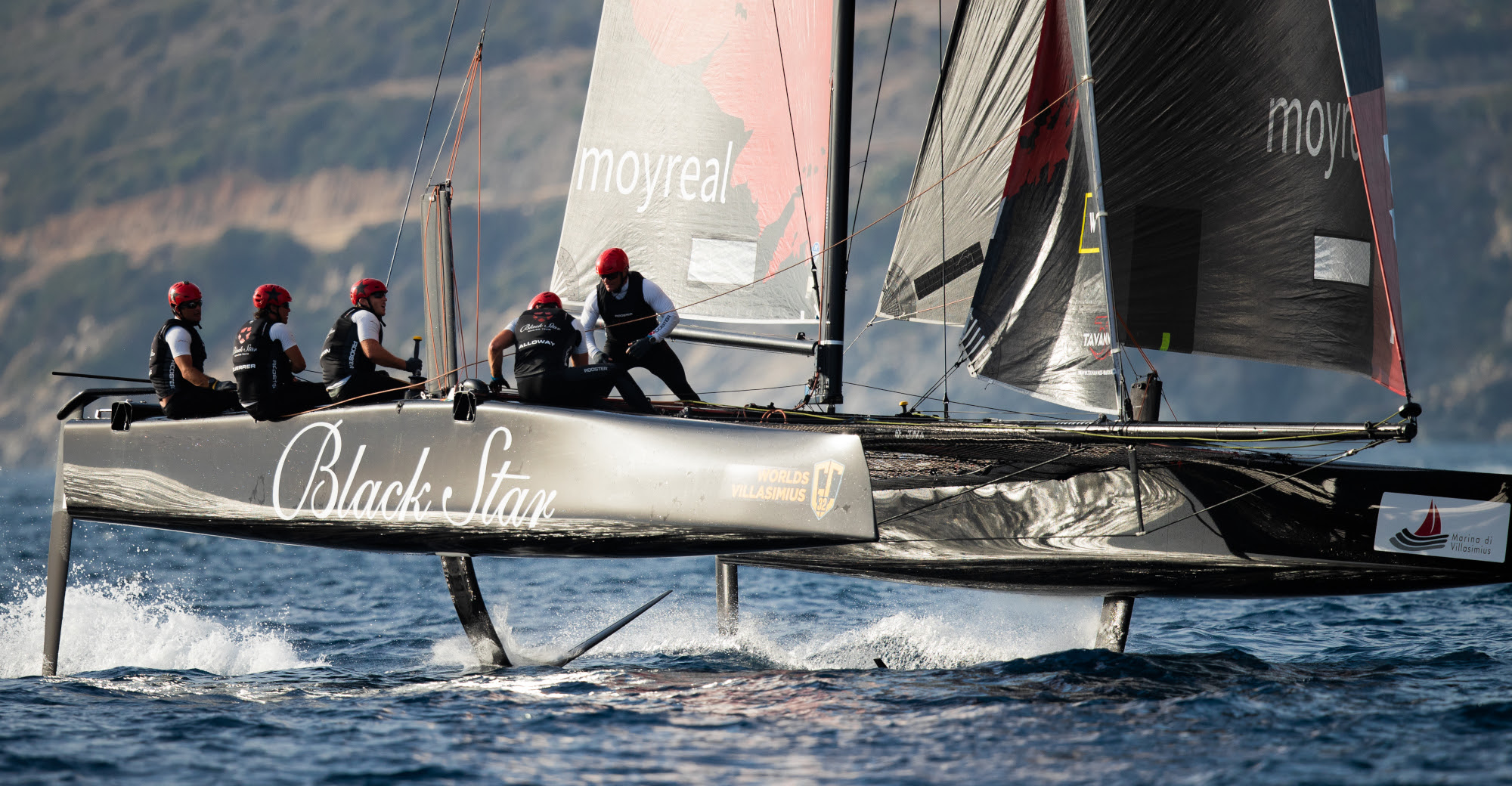 Otherwise it was a day when the name of the game was consistency. Like Zoulou, Christian Zuerrer’s Black Star Sailing Team didn’t win a race but a 2-2-3 scoreline, clawing back positions whenever they could, including overtaking Alinghi on the final run of the last race, made them today’s top scoring boat.

Winner of today’s first race were the Austrian double Olympic Tornado gold medalists Roman Hagara and Hans-Peter Steinacher and their renowned light wind specialist crew on Red Bull Sailing Team. This was fortunate as the race was only just completed successfully with the boats low riding across the finish line.

“We have a good feeling in this really light stuff and the boat is going well, which helps,” said Hagara. “It is good to have a win under our belt. After that we started well, but then we were always on the wrong side, and made a few errors on the race course which doesn’t help in this fleet.”

The long wait ashore, Hagara said, didn’t phase them: “Everyone knew there might be some wind later in the day and to try and stay focused.”

After yesterday leading two races which had to be abandoned, the defending World Champions on Alinghi finally got a deserved bullet in today’s second race. They end the day tied on points with Zoulou (which leads on countback). Bowman Yves Detrey explained: “It was nice and shifty out there, so it was really hard to pay the shifts well all the time. I think we had pretty good starts and first upwinds in all the races, but just one little mistake on the choice of marks and you are behind.”

Alinghi would be leading this evening were it not for a deep result in the fluky first race, a tough outcome as they had been leading it. “The guys that came in from the far right finished ahead of us. Just some bad luck like that can cost you a lot of places…” Detrey concluded.

While they probably have had the least time in the GC32 over the last two years, and also have one of the youngest crews (just two raced are from 2019), Switzerland’s Team Tilt is demonstrating how racing a GC32 is like riding a bike. They finished the day two points off the lead, winning today’s final race. Skipper Sébastien Schneiter explained: “It was a shame we made a big loss on the first race on the first downwind. But we put it together in the last race, so otherwise I am pretty happy with the day. We’ll try to maintain the momentum for the next days.” 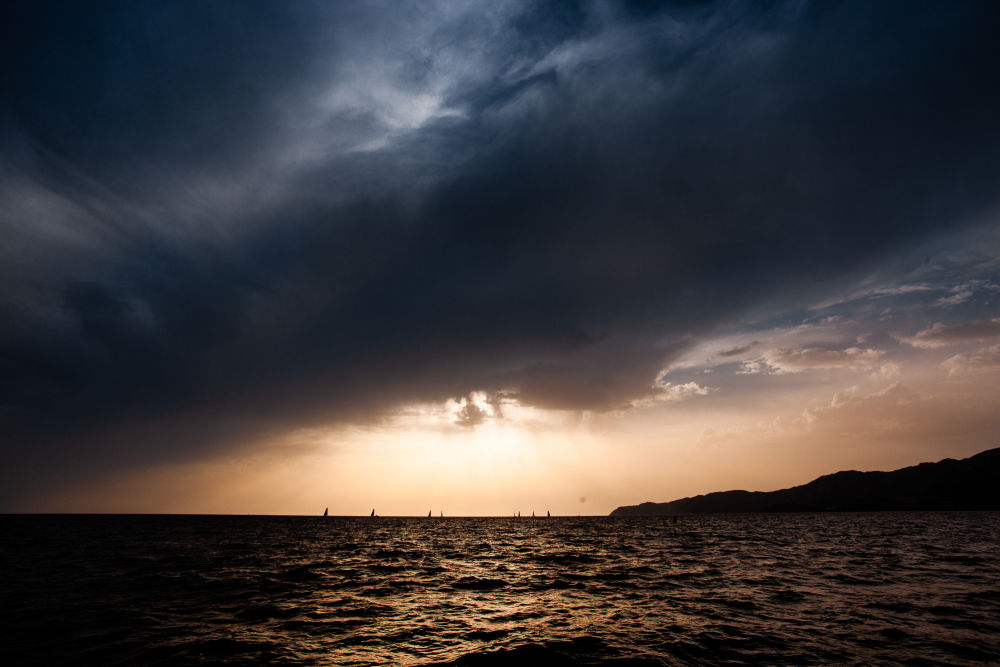