Neck and neck going into GC32 Riva Cup One week to go until battle resumes on the GC32 Racing Tour at one of the world's best venues for high speed foiling catamaran action - Lake Garda, Italy

Battle resumes on the 2019 GC32 Racing Tour in a week’s time with the penultimate event of the season, taking place in one of the world’s best locations for ultra-high speed one design foiling catamaran racing.

Riva del Garda and its club the Fraglia Vela Riva, is the venue of choice for many top sailing championships because of its famous, usually strong, winds – the morning northerly, the Pelèr and the afternoon southerly, the Ora – combined with flat water. It is these circumstances that have resulted in some of the highest GC32 speeds of 40+ knots being recorded. The venue is also situated in the most dramatic settings, surrounded by the mountains of the southern Dolomites and, locally, the well-known cliff face on the west side of the race area.

After three events in Villasimius, Sardinia, the GC32 World Championship in Lagos, Portugal and August’s Copa del Rey MAPFRE in Palma, the top of the 2019 GC32 Racing Tour leaderboard is turning into a two way fight between Oman Air and Ernesto Bertarelli’s America’s Cup veterans on Alinghi. Oman Air won in Villasimius and Copa del Rey MAPFRE while Alinghi claimed the prestigious World Championship. The net result is the two teams being tied on five points, Oman Air leading but only by virtue of having won the last event in Majorca.

“I am really looking forward to Riva on the GC32 Racing Tour,” says Minoprio, who has the added incentive to do well as GC32 Racing Tour will conclude this year in Oman in November. “At the moment we are first equal with Alinghi and we’d really like to go into the final event with a lead, on our way to winning the overall series in Oman.”

However the former Match Racing World Champion, turned Volvo Ocean Race and America’s Cup sailor, acknowledges: “At the moment, Alinghi are definitely the benchmark team.” Minoprio also comes to this event with his ‘eye in’ after competing at another event in Riva del Garda last week. He will be race fit on this course, which Minoprio says should make up for his disappointment in last year’s GC32 World Championship held here. “That was a huge eye opener. We left a lot of points on the table through not knowing the lake like the other teams,” he admits.

For Alinghi, coming from Geneva, sailing on a lake should present few novelties, although Garda’s surroundings are more immediately mountainous. “We sailed there last year during the Worlds and we had a practice session two weeks before,” recounts Alinghi Team Director Pierre-Yves Jorand. “We know it a little bit from other classes too. It should be windy in the morning with a sea breeze in the afternoon, although last year during the Worlds, the conditions were slightly different. It is a great venue and the surroundings are awesome.”

Currently holding third in the GC32 Racing Tour is Roman Hagara’s Red Bull Sailing Team, just three points ahead of Erik Maris’ Zoulou.
Returning to the GC32 Racing Tour for the Riva del Garda event is American Jason Carroll’s Argo having stood down for Copa del Rey MAPFRE, taking time out to compete in and ultimately win line honours in the Transpac race. However Carroll and his crew will have a hard fight with Zoulou to gain the lead in the GC32’s 2019 Owner-Driver Championship. 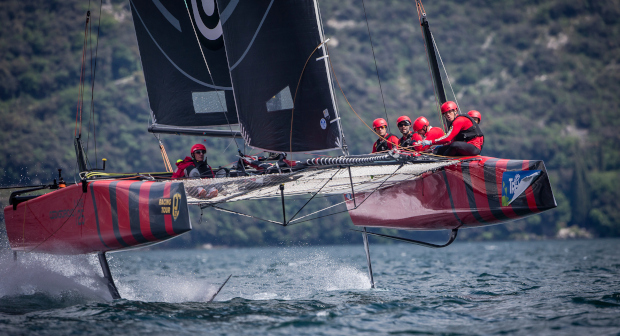 Also back is Código Rojo Racing of Federico Ferioli. Due to personal circumstances and crew availability, it has been a year since the Argentinean team last competed on the circuit so Ferioli was busy training with his team on Lake Garda last week. “We definitely need to catch up and get the rust out. So our week in Malcesine has been helpful, worth doing,” he said.

He is a big fan of Lake Garda having raced here with the GC32 Racing Tour in 2017. “It is always great to come to Riva – it is such a great place with the amazing, scenery, the wind, the flat water and the social side, the town.” Código Rojo Racing is likely to find competition with the new Black Star Sailing Team of Christian Zuerrer, who joined the Tour for the first time this season.

Ferioli acknowledges that since last year the level has risen on the GC32 Racing Tour with the former Extreme Sailing Series teams now competing. “That definitely raises the level. Now it is more demanding to keep up with the fleet we need to train more.”

Racing at the GC32 Riva Cup will be over 12-15th September with a practice day on 11th.

Those interested in being part of the event can now sign up for a VIP guest experience which, depending upon the package, can permit access to the GC32 Lounge, watching the racing from a spectator boat and even sailing on board. Contact: grazia.odasso@youreventgroup.it