Off to a flying start at the Bullitt GC32 Trofeo di Roma Waking up to the gloom of an unexceptional forecast for Civitavecchia today, it was with great delight that the Trofeo di Roma, the fourth event on the Bullitt GC32 Racing Tour, got off to flying start – quite literally. At this morning’s press conference held in the Terminal del Gusto, a modern day market for […]

Waking up to the gloom of an unexceptional forecast for Civitavecchia today, it was with great delight that the Trofeo di Roma, the fourth event on the Bullitt GC32 Racing Tour, got off to flying start – quite literally.

At this morning’s press conference held in the Terminal del Gusto, a modern day market for local produce from the region, a prayer was put up for wind. Sure enough the wind gods obliged allowing racing off the Italian seaside resort, situated on the outskirts of Rome, not only to get underway on time, but, all six scheduled races successfully to be sailed too.

Defying the forecast, the first two races were held in 10 knots, which, to the delight of both the crews and the spectators on the water and along Civitavecchia’s beach, was enough to get the GC32s airborne on the downwind legs and hitting speeds of up to 20 knots.

In the first three races there were three different winners with the Yann Guichard-helmed Spindrift racing getting the first win of the day, followed by Sultanate of Oman, skippered by Leigh McMillan and ARMIN STROM Sailing Team of Swiss four time Star Olympian, Flavio Marazzi.

After a tricky start, including losing the vital pin securing the tack of their genniker during race three, Ernesto Bertarelli’s Alinghi fought back to win race five.

However the class act of the day was Spindrift racing that through the day never finished off the podium while also going on to take the win final race.

“It was a good day,” said Spindrift racing’s French skipper, Yann Guichard. “Conditions were light, but in the first two it was really nice to be able to foil stably in a flat sea. We sailed well, the manoeuvres were good, team work was good and the speed too. We didn’t have any issues during the races.” And this was despite the wind dropping from full foiling, to weather hull flying, to full ‘low rider’ mode over the course of the afternoon.

Leigh McMillan, the British skipper on Sultanate of Oman, came ashore pleased that PRO Anne Mallédant managed to get in six races, but kicking himself that Spindrift racing had managed to overhaul them in the last two. “That was annoying,” he said with a sigh. “We got up to second in the penultimate one and lost it on a penalty. Spindrift luffed us at the windward mark and we tacked in front of them. Then we were leading the last race but there was a big right shift. We tacked then sat in a hole for ages and they just sailed past us in lovely breeze.”

Aside from their genniker tack issue in race three, Alinghi had a varied day. However their Californian helmsman Morgan Larson was pleased to have got the full schedule of racing in: “I thought the day was going to go bad, but it all worked out – it was perfect, beautiful sailing.” While coming off the water eight points away from Spindrift racing, no one doubts that Ernesto Bertarelli’s team has the ability to fight back just as they did in Kiel last month when, following a capsize on practice day, they went on to win the event.

Flavio Marazzi’s ARMIN STROM Sailing Team had the most up and down day with wins in races three and four but coming last in the first and last races. “Up is better than down!” quipped Marazzi coming ashore. “We made good manoeuvres and were in the right position. In the last race it was the same, only it went the opposite way – we gybed in a place where we should never have gybed.”

Wearing his Class President’s hat, Marazzi says he is pleased that the level of racing within the Bullitt GC32 Racing Tour continues to rise with four of the five teams competing here winning races today.

Racing continues tomorrow with six races scheduled and a first warning signal at 11:30.

See the full results for day one – here 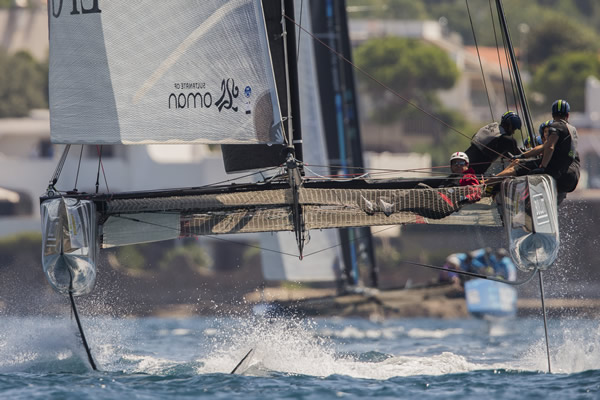