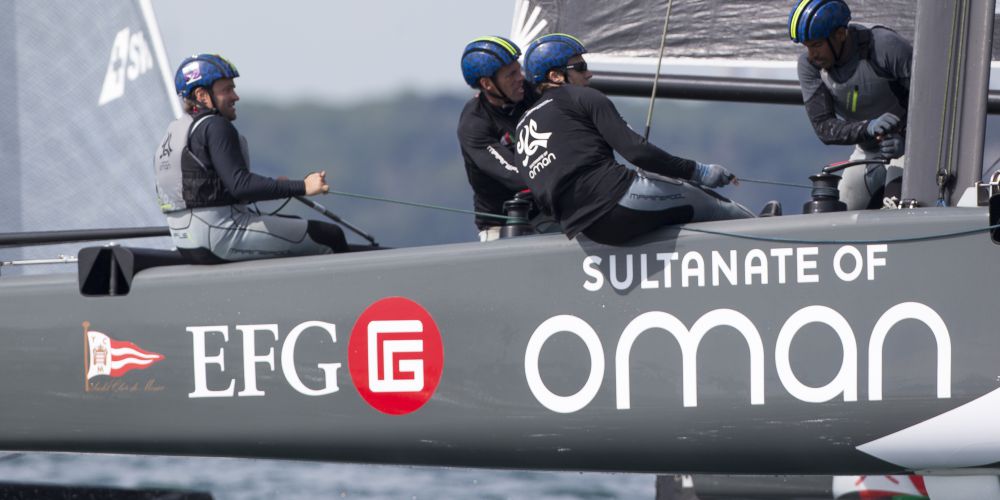 With twelve races now sailed at the Bullitt GC32 Racing Tour’s Cowes Cup, still just one point separates the leaders and this was only decided in the final metres of today’s last race.

Compared to yesterday, conditions were equally sunny, but the wind failed to materialise in the morning and the fleet was held ashore for an extra hour and a half. Racing eventually got underway at 1330 BST in a 10 knot west south-westerly.

Throughout the day Sebastien Rogues’ ENGIE made the best of the America’s Cup-style course’s reaching starts. His crew typically unfurled the gennaker earliest allowing the fast-moving blue catamaran to thread her way through to the front. ENGIE led the majority of races in the hair-raising sprint to the reaching mark.

However it was Leigh McMillan’s two time Extreme Sailing Series champions on board Sultanate of Oman that excelled today. In six races today they never finished lower than second. This was despite some personal trauma when, early on during the first beat of the final race, McMillan tripped while crossing the boat and managed to dislocate a finger when it became caught in the netting that spans the two hulls.

“It was still connected and there was no bleeding, just a lot of pain, so I took over the helm for the last bit and once the adrenalin kicked in Leigh started helming again,” recounted mainsail trimmer Peter Greenhalgh.

With McMillan sported this injury, Sultanate of Oman performed what was the ‘move of the day’ when she rounded the last mark of the final race in third place and, thanks to the fast deployment of their genniker (the large downwind sail their rivals weren’t using at this point) looked set to overtake two boats to win the race in the final metres. Ultimately in the photo finish they failed to catch ENGIE, but did manage to overhaul ARMIN STROM Sailing Team. As these two boats were tied on points for the lead going into the final race, this key move handed the Omani boat a one point advantage going into tomorrow’s racing. 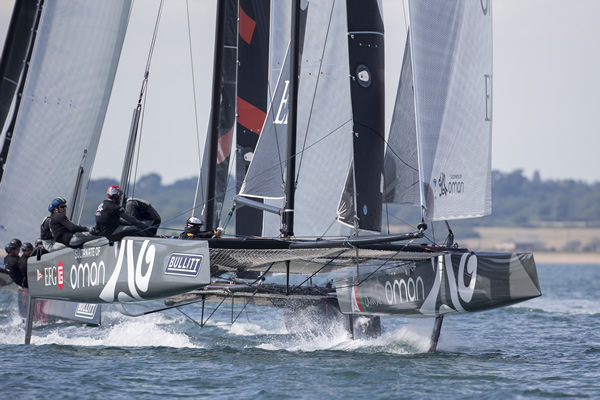 The Omani team’s consistent performance came despite their boat suffering some minor technical issues, as Greenhalgh recounted: “The lift line on the daggerboard snapped before the start of the first race and I was having to re-splice it with one and half minutes to go!”

With a strong tide flooding on the western Solent and lighter conditions, racing was more tactical today and crews had their work cut out to determine the optimum combination of least tide and most pressure. For most of the day – up until the final race – this involved avoiding the southerly side of the course (left looking upwind).

It was also a day where it was easy to get it wrong and several boats made the costly mistake of misjudging the layline into the top mark, where the extra tack(s) to rectify this could cause you to drop from first to last.

Despite another frustrating day on the water, Jason Carroll’s Team ARGO, the only team yet to win a race, is still enjoying the learning experience, having made the effort to come here from the USA. Sailing with the two time Melges 32 World Championship winning team is multihull expert, Dutch A-Class catamaran World Champion, Mischa Heemskerk.

“It is a lot of fun,” said Heemskerk of this week’s catamaran racing on the Solent. “This is such a talented, motivated group of sailors – it is cool to see them making steps all the time, even though we’re not getting the results we want, which grates. We put ourselves in some strong situations and them we manage to mess it up, but there are plenty of opportunities to improve.

“Today, especially in the first races, it was mainly about not making mistakes. Whereas yesterday we were very good at starting, today we had difficultly nailing those.”

Additionally Heemskerk observed that the team, which in addition to their skipper Jason Carroll, also includes leading US Moth sailor Anthony Kotoun, was also taking time to get used to the rapid turn-around times between races.

Tomorrow, finally, 13-17 knots are forecast for the afternoon, enabling the five GC32s to get fully foiling and for boat speeds to soar into the 30s. Six races are scheduled, prior to the boats competing alongside almost 1600 other yachts in Saturday morning’s J.P. Morgan Asset Management Round the Island Race, also organised by Cowes’ Island Sailing Club.

NB: There is an opportunity to meet the skippers from 1115 BST tomorrow in Cowes Yacht Haven prior to the press conference for the JP Morgan Asset Management Round the Island Race at 1200.