Taylor Canfield flies the Stars & Stripes for Argo at the GC32 Mar Menor Cup Flying catamaran action gets under way on Murcia’s unique semi-landlocked sea tomorrow with the final and deciding round of the 2021 GC32 Racing Tour. The Mar Menor is a 170km² salt water lagoon located on Spain’s Costa Calida, where the GC32 Mar Menor Cup is being supported and hosted over the next four days by […] 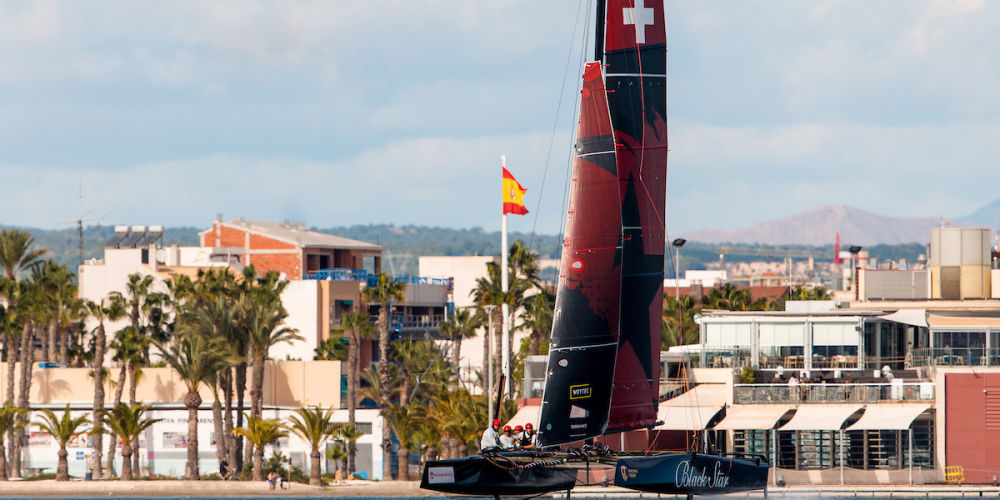 Flying catamaran action gets under way on Murcia’s unique semi-landlocked sea tomorrow with the final and deciding round of the 2021 GC32 Racing Tour. The Mar Menor is a 170km² salt water lagoon located on Spain’s Costa Calida, where the GC32 Mar Menor Cup is being supported and hosted over the next four days by the Club Náutico Lo Pagán with the support of Turismo Region Murcia, Autoridad Portuaria de Cartagena and local municipalities San Pedro del Pinatar, Cartagena, San Javier and Los Alcázares. 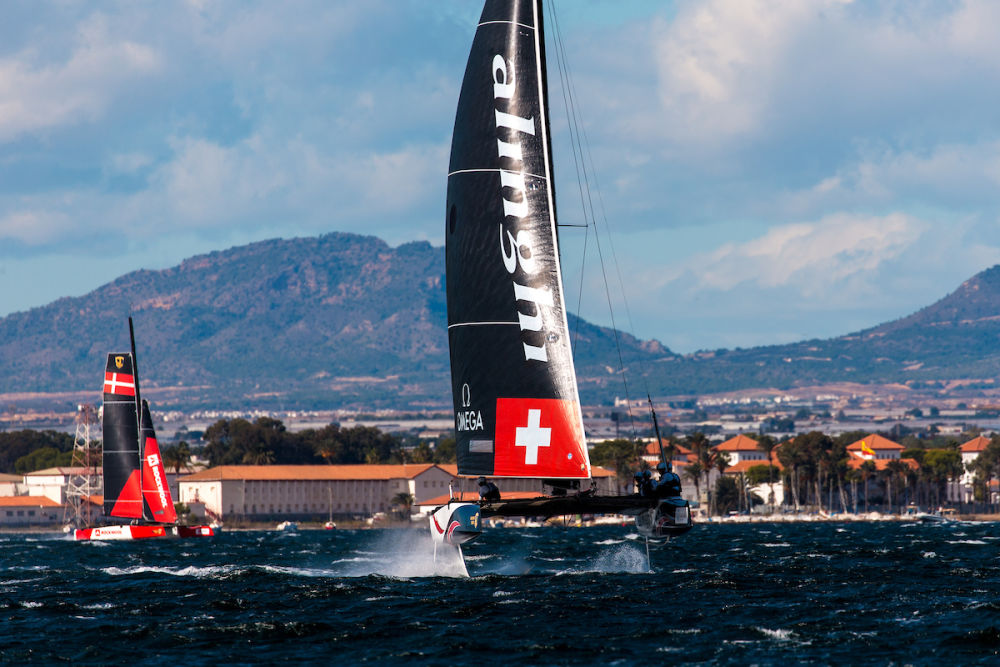 Having won the first two events of the season in Lagos, Portugal, Ernesto Bertarelli’s immaculate Swiss team on Alinghi holds a three point lead going into the GC32 Mar Menor Cup and is favourite to win the season. However the Swiss are not counting their chickens, especially after losing the GC32 World Championship in Villasimius in September on the last leg of the last race due to an issue with their boat.

“The team is in good shape and the boat is repaired from the last event,” advises helmsman Arnaud Psarofaghis. “It doesn’t mean that we won’t push it hard! We have a comfortable lead – we have had less, but it is a sail boat race and anything can happen as we saw last time. So we need to win this event to win the season.”

Psarofaghis is looking forward to racing on the Mar Menor, which being near-landlocked offers the prospect of flat water and big wind, the likes of which is usually only found in venues like Lake Garda but here without giant mountains to affect the wind. “There should be nice breeze this week. And it is quite warm still. It will be a good event for the end of the season.”

Already out in training today the GC32s were attaining near top speeds, Christian Zuerrer’s Black Star Sailing Team recording 37.8 knots after one bear away.

This week Alinghi faces a fresh threat. Unable to compete here at the last moment, Jason Carroll has lent his Argo GC32 to US Virgin Islander Taylor Canfield. One of the most talented sailors of his generation, Canfield is a past World Match Racing Tour champion and M32 world champion, recently set the record for winning the Congressional Cup for a fifth time and is an America’s Cup skipper-in-waiting with his Stars & Stripes team. 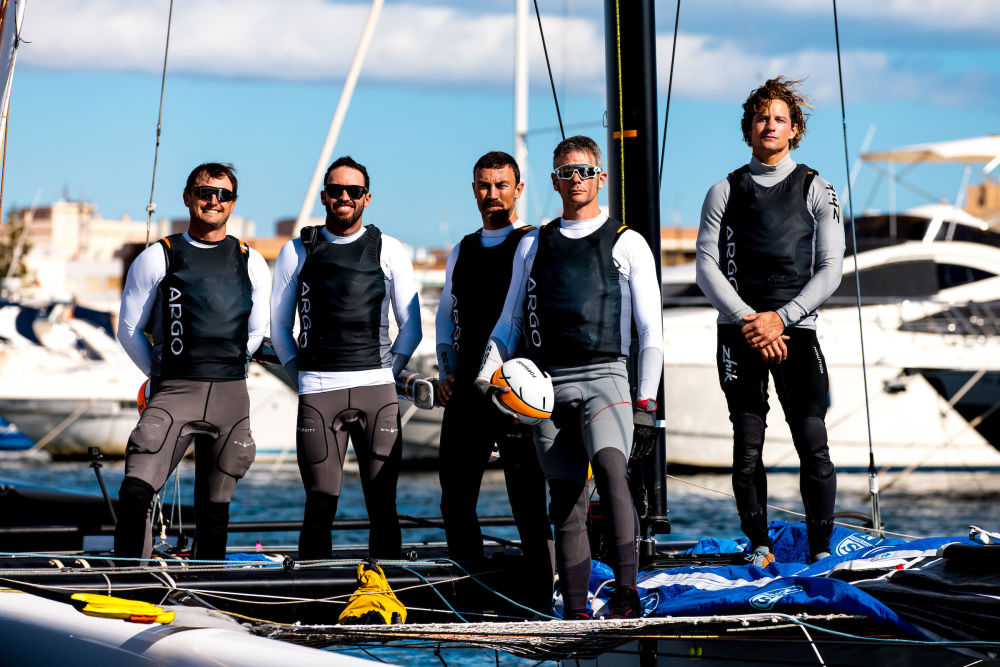 Canfield sailed the GC32 for four events of the Extreme Sailing Series in 2016 and has since used GC32s for training in California with Stars & Stripes. “It is a great boat – I am looking forward to being back in it. I will be driving this week thanks to Jason Carroll who has handed over the keys.”

Sailing with Canfield is veteran GC32 crew Ed Powys, plus his M32 crew Ted Hackney and Kinley Fowler and Argo’s Ben Bardwell. “We have a good group here. I have done a lot of sailing with them and Ed is very experienced. We are here to win. In the light air here it has felt normal and natural, but it might be different in big breeze. We have the potential to be a threat.” 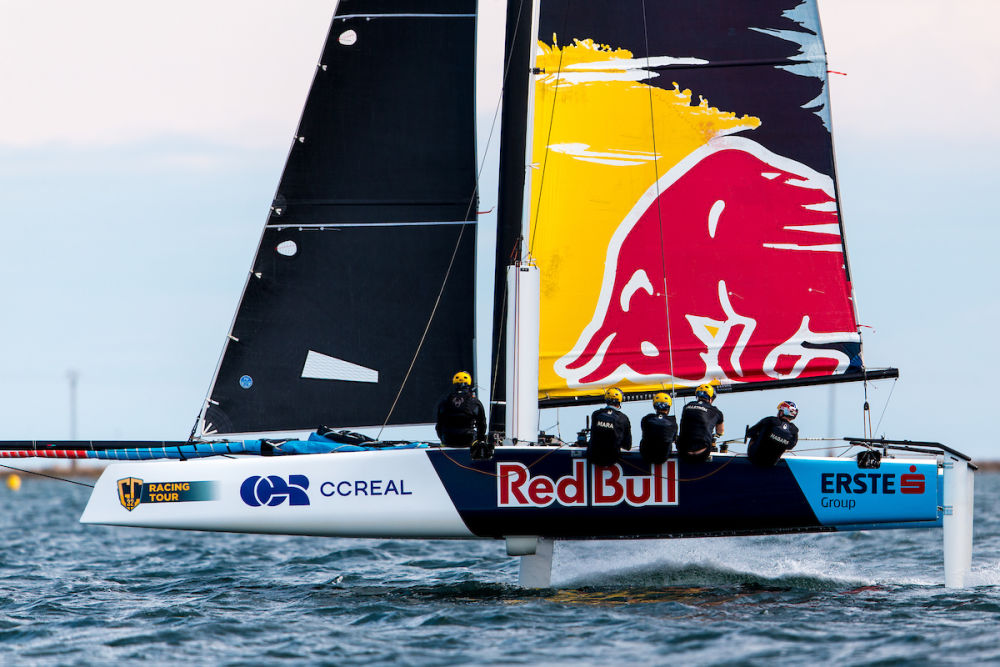 “I am a little bit sad – we have had nice moments racing in this class,” admits Hagara, whose team in September became the 2021 GC32 World Champions. “That was definitely our biggest achievement in the class. The whole team worked hard for the two years we have been sailing together. It is really great with this team.”

Currently second overall, Red Bull Sailing Team will have their work cut out to catch Alinghi. “It will be really difficult because we lost too many points at the second event in Lagos on them, but we will try.”

Leading GC32 owner-driver France’s Erik Maris and his Zoulou team have also recruited some new talent. Quentin Delapierre represented France in the Nacra 17 at the Tokyo Olympic Games but has recently hit the headlines taking over the helm of the French SailGP team. With Zoulou, he drives during practice racing before Maris arrives and then turns to a coaching role for the team. 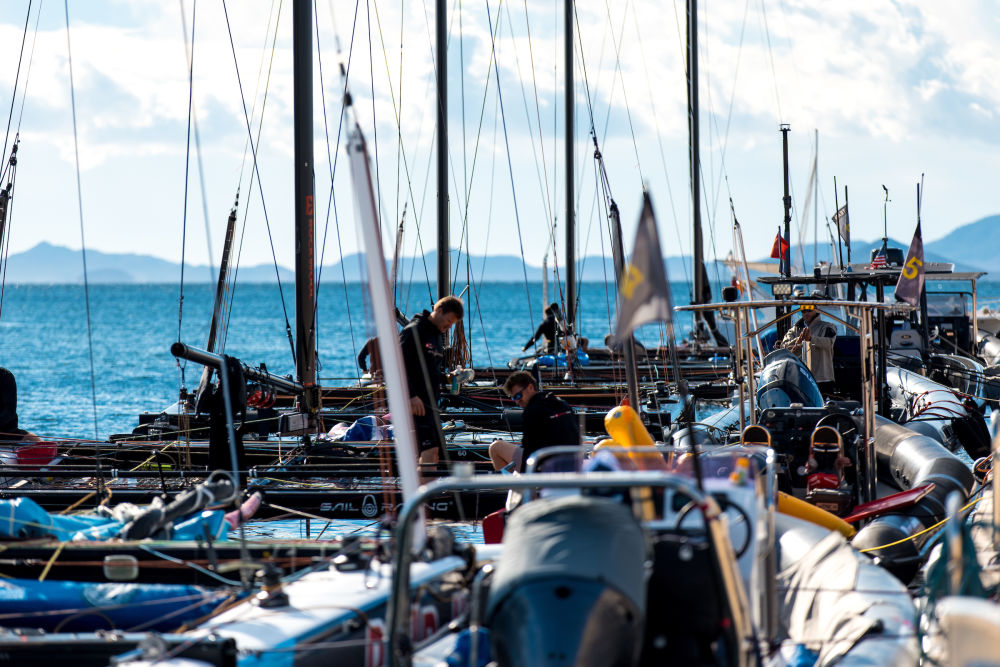 Also on the ascent is another SailGP team, the Danes on Team Rockwool Racing. Skipper Nicolai Sehested is looking forward to the big wind flat water conditions that are forecast, especially for the weekend: “We lost so many places on the first day at the Worlds because we just haven’t sailed the boat much in the light with the genniker upwind, whereas in the windy stuff it is more about pushing hard. That suits us pretty well, going hard.” However should it prove light tomorrow and on Friday they will have to improve their light wind ability rapidly.

The event is part of the Spanish celebrations marking the 500th anniversary of the circumnavigation of Ferninand Magellan, that was completed by Spanish navigator Juan Sebastián Elcano.

Racing on the Mar Menor out of Club Náutico Lo Pagán will be at 1300 BEST tomorrow and will conclude on Sunday.