Red Bull finds its wings on penultimate day of GC32 World Championship Villasimius in southeastern Sardinia delivered completely today, providing the perfect combination of wind, sun, flat water, a stunning backdrop and welcome reception ashore back in Marina di Villasimius for the flying catamaran teams. In the northeasterly to easterly wind, five races were held, starting soon after midday and concluding three hours later. While at the […] 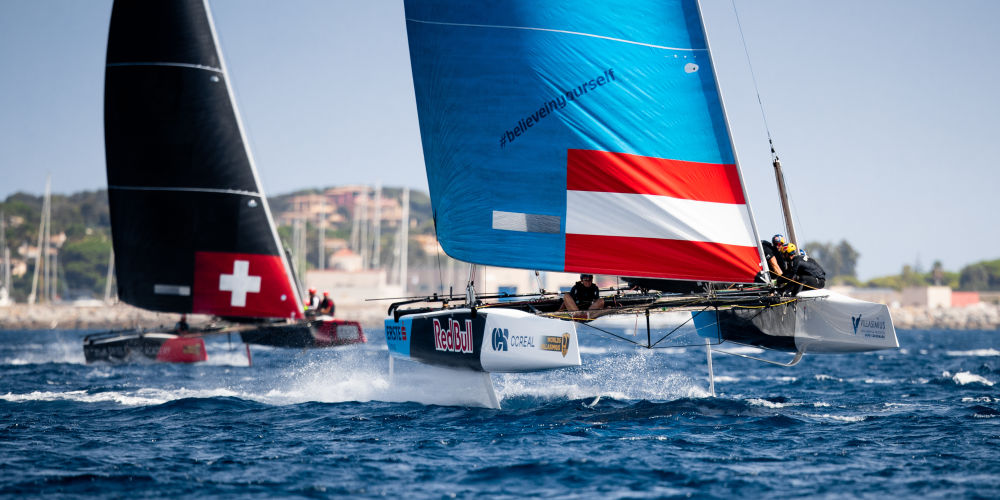 In the northeasterly to easterly wind, five races were held, starting soon after midday and concluding three hours later.

While at the beginning of the day, just three points separated the top five teams, at the end of today the leaderboard is shaping up.

Austrian double Olympic Tornado gold medallists Roman Hagara and Hans-Peter Steinacher on Red Bull Sailing Team had another excellent day of exclusively podium finishes, including bullets in the third and final races. They have a strong six point lead going into the final day of racing tomorrow.

“Villasimius delivered today – it suited us really well,” said a pleased Hagara. “We had good pace and we made very little mistakes and the good thing is that we could rely on the crew as they know what to do. Even last minute manoeuvres, we did really well today. It is great, really good fun to race with these guys.”

While Hagara says he is always feels relaxed on the race course, the Red Bull Sailing Team does seem to have a found some new gears at this regatta, sailing with great fluidity, skill and decision-making. Of today’s racing and conditions the Olympic legend added: “It settled down to one wind direction which was nice as you could play with the gusts and shifts. It is a good place to sail – the flat water is perfect for these boats. The left was little bit stronger, so you had to come off the start line well. It was always very compacted at the windward gate.”

The Danish crew on Team Rockwool Racing seem to have days that are black, white, but rarely grey. Yesterday was one of the format leaving them in last but one position, 14 points off the lead. Today the pendulum swung the other way and they, like Red Bull Sailing Team, enjoyed exclusively podium finishes (albeit no firsts), scoring 13 points today to Red Bull’s nine. This has elevated them to fifth, 15 points off the lead and six from the podium.

“It was a better day for us for sure,” Team Rockwool Racing skipper Nicolai Sehested. “It was nice to be on the podium in all five races after a terrible day yesterday in the light tricky stuff. We still have a lot of points to catch up. We want to do the same thing tomorrow with five good races and see where we end up.” 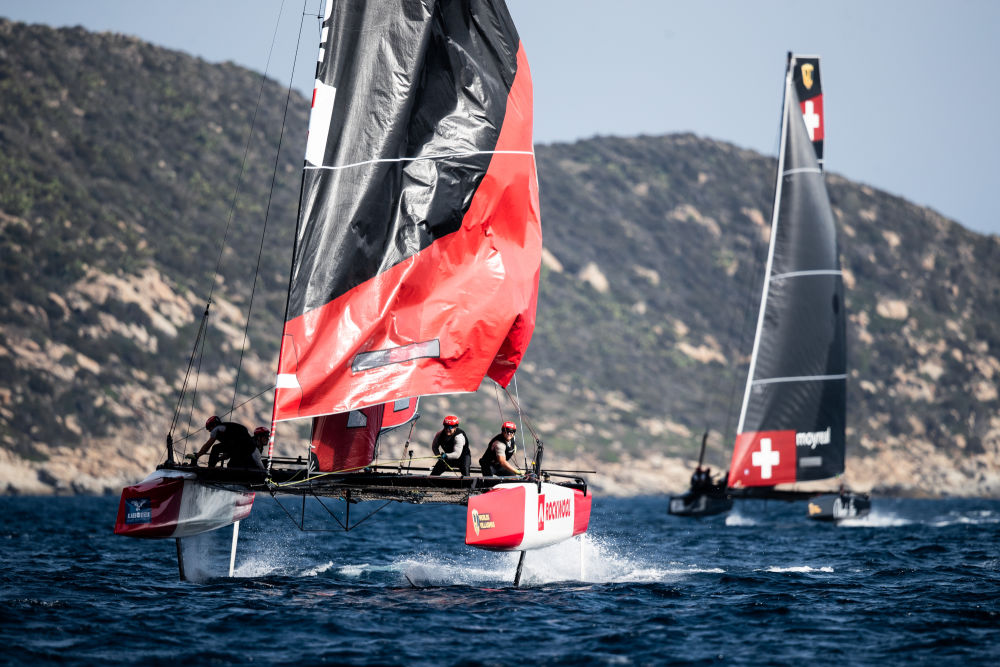 The Danes loved the left, land side of the course today, starting at the pin or close-by. “There was a bit of shift when we got up top left and every time we crossed the boats coming in from the right, so it paid off. We fought pretty hard for it in every start…

“Today there was good, steady breeze, so it was more about making steady decisions and not taking big gambles. The more breeze, the better for us.”

Top scoring boat yesterday was Christian Zuerrer’s Black Star Sailing Team. After laying down a marker by winning the first race today, they put in another solid performance. This has left them in second, albeit with defending World Champions, Alinghi, breathing down their neck, one point behind.

“In race no1 we went left – every time the left was paying. After we took the first race we kept it simple,” said Zuerrer. He added of the competition: “It is an absolutely high level, with all of the teams within a few points. It is still open.”

The young Swiss crew led by Sébastien Schneiter on Team Tilt rounded out the day with a 1-2 leaving them in fourth place. While Erik Maris and Zoulou have fallen from the top spot, they are still ahead of American Jason Carroll’s Argo in the battle between the owner-drivers.

Meanwhile fighting valiantly in last place is the newbie GC32 team, Swiss Foiling Academy, led by helmsman Loic Forestier and main trimmer Julien Monnier, that aims to development young talent. Their crew includes two women, Jessica Berthold and Laurane Mettraux, allowing them to sail with six. “It is hard because I think we are sailing better and better, but when we check the results it doesn’t show it,” said Forestier. “We must keep trying. I think for the upwinds we are better, but we must be more stable for the downwinds.”