Red Bull and Rockwool on form at the GC32 Mar Menor Cup A chilly start to the penultimate day of the GC32 Mar Menor Cup after Spain’s Costa Calida  experienced an overnight deluge, turned into a perfect day with the full schedule of five races held. The wind remained 13-15 knots, slowly veering into the north and the sun eventually came out to warm competitors and the […] 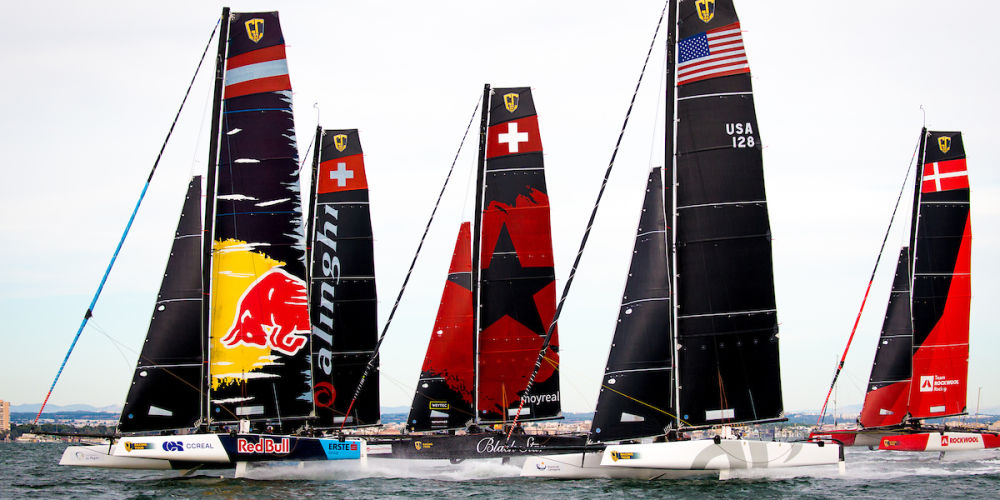 A chilly start to the penultimate day of the GC32 Mar Menor Cup after Spain’s Costa Calida  experienced an overnight deluge, turned into a perfect day with the full schedule of five races held. The wind remained 13-15 knots, slowly veering into the north and the sun eventually came out to warm competitors and the large weekend spectator fleet that had gathered outside of the race course’s safety perimeter.

The GC32 Racing Tour leader, Ernesto Bertarelli’s Alinghi which began today with a two point lead, got off to a difficult start. However compatriot Christian Zuerrer and his talent-laden crew on Black Star Sailing Team in second, also found today’s initial races tough.

On the ascent in their place was the young Danish team, Team Rockwool Racing and the recently crowned GC32 World Champions, Red Bull Sailing Team, skippered by double Olympic Tornado champion Roman Hagara. With reaching starts throughout the day, some last minute high speed repositioning got the Austrian team off to the best start but the Danes chose the time to gybe well and led onto the upwind. Red Bull eventually reclaimed the lead on the second upwind, only for Rockwool to relieve her of this coming into the top mark with starboard rights, thereby scoring her first bullet of the event.

“That race was the windiest and we could two-sail downwind. We sailed pretty fast and clean,” explained Team Rockwool Racing skipper Nicolai Sehested. “We could have won more races today but we made some painful mistakes, making the wrong calls. That is something we can improve upon.” In particular in the third race, the Danes were forced to give Erik Maris’ Zoulou room at the final mark which in a matter of seconds dropped them from third to last.

In today’s second and third races, Red Bull Sailing Team prevailed. In the first the start was again the ‘Rockwool and Red Bull’ show, with Rockwool leading on to the run but Red Bull using the power of the right to get ahead coming into the subsequent top mark and holding her lead from then on.

“The right side was more favoured,” admitted Hagara later. “There was shift and pressure there, so it worked well.” 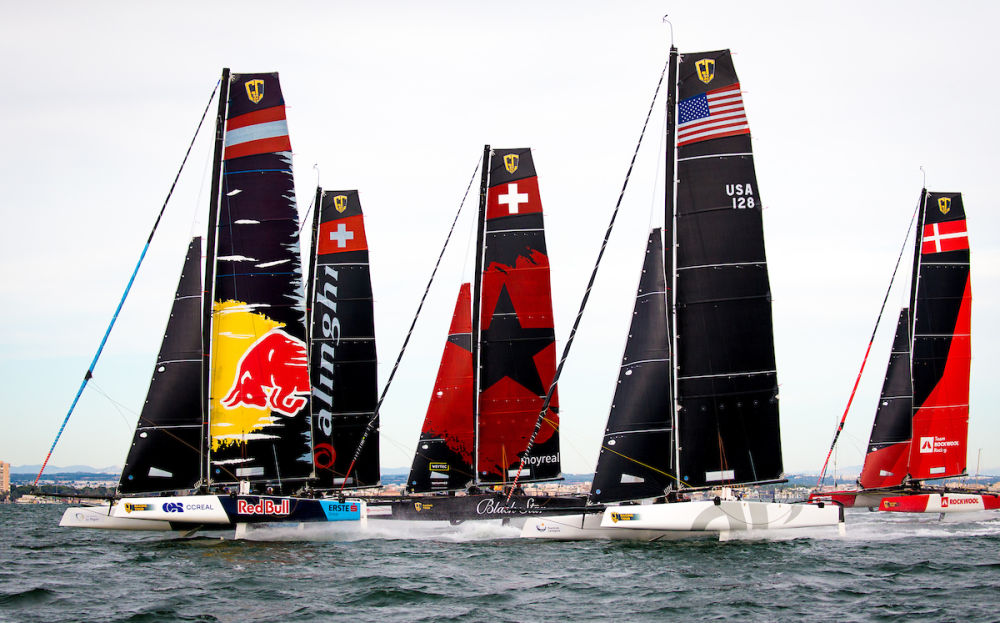 For today’s fourth and fifth races, balance was restored with both being scooped up by Alinghi. In the fourth today they won the start and led on to the run. They reached the top mark for the first time a nose in front of Black Star Sailing Team and Zoulou. The Swiss team’s simpler manoeuvre heregave them a brief advantage which they held to score their first bullet of the day from Zoulou.

In the final race, it was again Team Rockwool Racing that led on to the run, but Alinghi edged ahead by the leeward gate. The Swiss team benefitted from being on the right up the first beat and as the wind veered right and from there never looked back.

Thanks to her two bullets and a less than perfect day for Black Star Sailing Team,  Alinghi holds a nine point lead going into the final day with Red Bull Sailing Team now tied on points with Christian Zuerrer’s team. 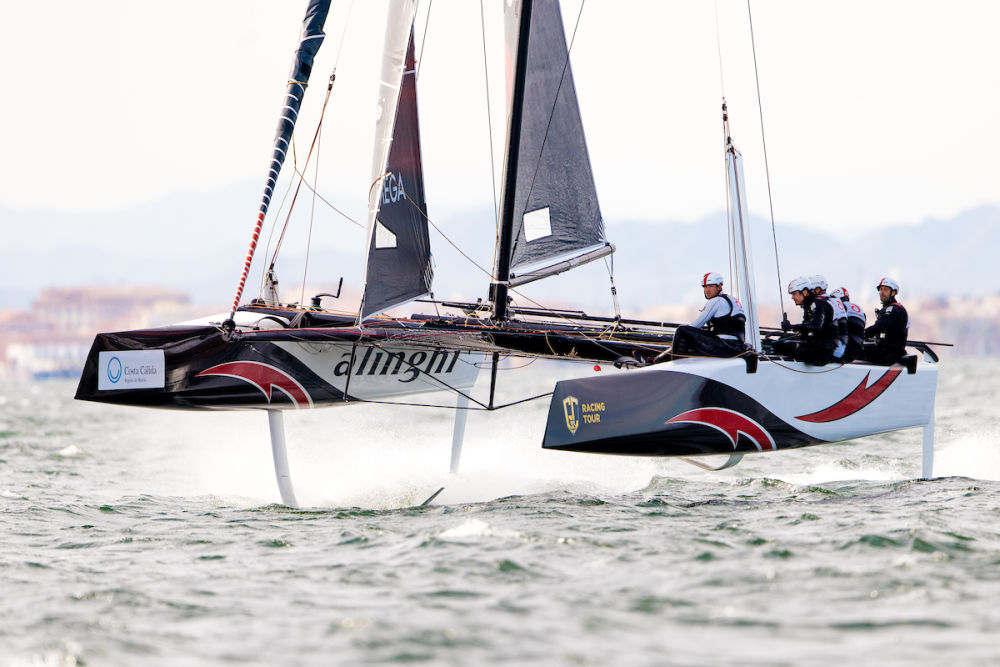 “It is very important to start well with the reaching starts. When you can position yourself nicely on the downwind it is already a good advantage,” continued Hagara. “Today it was tricky again, gusty, but we managed to start a lot better but we still had some issues at the leeward gate. When we did go smoothly around the leeward gate, it was all okay.”

Alinghi may be in a strong position going into the final day, but after losing September’s GC32 World Championship on the last upwind of the last race, they know not to ease off the gas.

“They have been sailing very well,” observed Alinghi team manager Pierre-Yves Jorand of the crew. “We had our ups and downs, but today was a really good day. Red Bull started very nicely in three races. But we managed to change our mode during the day and found some extra speed upwind and in the end we had a good day.”

And of tomorrow? “We will double check everything. We have a good points margin. We know what to do and how to deliver tomorrow and we will take into account every aspect. But it is not over until you cross the finish line. We experienced that in Villasimius.”

And can Red Bull Sailing Team catch the dominant Swiss? “It is difficult because they are so consistent,” concludes Roman Hagara of Alinghi. “We lost some points on the first two days and it will be difficult to catch up. But we will try. It is a lighter forecast for tomorrow but we will take whatever comes.” 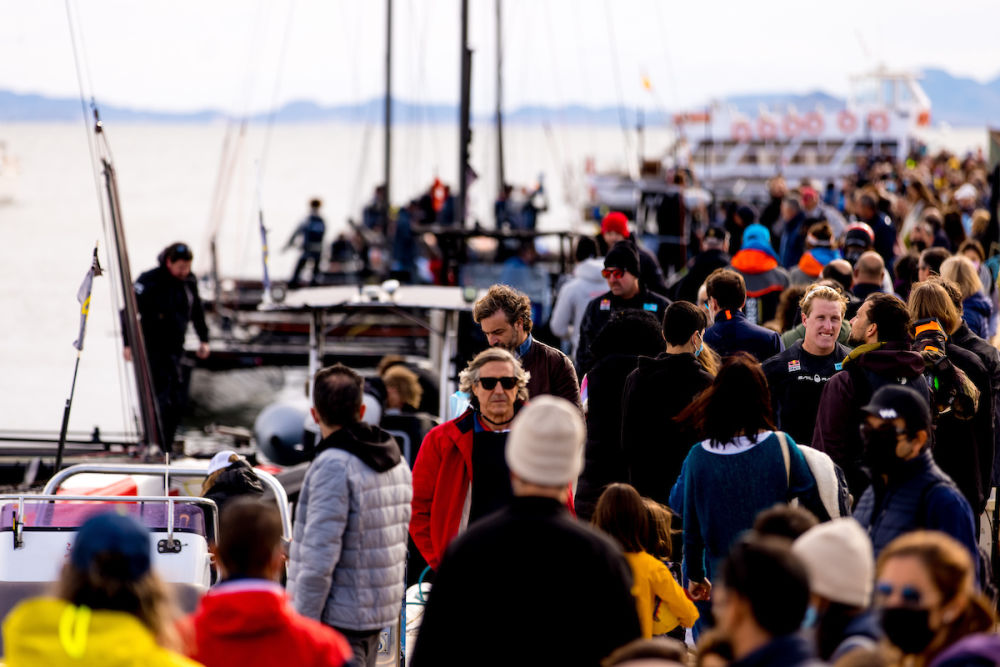