Safety and the GC32 The Marseille Test Event for the 2015 Bullitt GC32 Racing Tour got underway on Wednesday with a day of meetings ashore including technical briefings examining rules and penalties but also looking in detail at safety.

Safety and the GC32

The Marseille Test Event for the 2015 Bullitt GC32 Racing Tour got underway on Wednesday with a day of meetings ashore at the Pullman Hotel in Marseille’s Port du Prado. Considerable ground was covered including an opportunity for the teams to meet each other, the management of the Tour and of the event’s hosts Marseille One Design, organised by Manfred Ramspacher and his company Sirius Events, plus the GC32 Racing Tour’s sponsor, Bullitt Group, represented by co-CEO Dave Floyd.

Alongside technical briefings were some interesting discussions regarding the rules and penalties – the latter complicated, for example, because imposing a penalty turn (as occurs in slower forms of yacht racing) is potentially dangerous on a fast moving, air-borne yacht such as a GC32.

One aspect of high speed foiling catamaran racing, that all involved with the circuit are taking very seriously, is safety. The group was shown a presentation compiled by Julien Cressant, sailor and Safety Manager for the Swedish America’s Cup challenge Artemis Racing, French Sailing Team Physiotherapist Bertrand Guillo and Rémi Finiel, General Manager of FORWARD WIP. This summarised the ‘risk’ situations for the boat and the potential damage to crew that could result from each one:

Then, on a more positive note, the presentation examined how to minimise personal injury in these scenarios. In particular it recommended preparation so that teams and their individual crew are aware of the risks and have a plan worked out in case any of these eventualities occur.

Also of paramount importance is crew wearing protective gear – body armour effectively – tailored for high speed sailing craft such as the GC32s. Rémi Finiel’s Swiss company FORWARD WIP, a partner of the Bullitt GC32 Racing Tour, manufacturers such equipment, including a specialist helmet and jacket. These were originally developed for the French campaign Energy Team that raced on the America’s Cup World Series, while the company’s Impact Vests were used by both Artemis Racing and Oracle Team USA in the 34th America’s Cup. 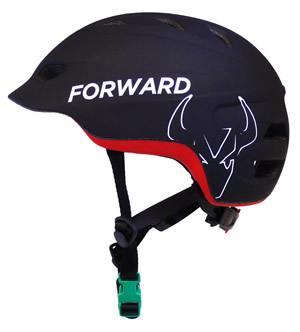 As Finiel points out, his helmet “has the lightness of a bicycle helmet. Its fit is important – you want to forget you’re wearing it and it should provide shock absorption. But the unique thing about it is that it has a ‘panic release’ buckle, in case you are hanging by your helmet. With the release, 6-8 kg and it pops open.”

The jacket contains the international standard 50N of buoyancy, but utilises a special kind of foam, of the sort used to protect downhill mountain bikers and skateboarders by providing impact protection. However following lessons learned in the last America’s Cup, the jacket can also be fitted with equipment such as a knife, a radio, a net cutter, a pocket for a flare and also an air bottle, good for 20 breaths or two to three minutes underwater, says Finiel. He advises that the extra oxygen is only effective if the crew is practiced in using it.

A third product under development by FORWARD WIP is a full suit that allows mobility while providing protection in the human body’s most vulnerable areas such as the chins, knees, shoulders and sides. “We did a survey of 100 sailors looking at where they get cuts and bruises and in each spot added some reinforcement, but with freedom of movement in mind,” says Finiel.

But the onus is on teams to familiarise themselves with all this gear so that its use becomes second nature in the event of them having to use it in anger. 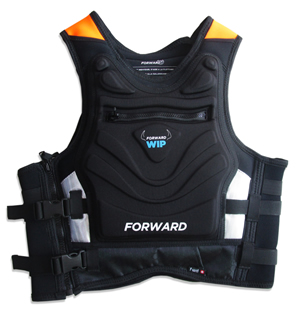 In reality minimising danger extends to all aspects of the racing. Procedures are in place on the Bullitt GC32 Racing Tour so that if, for example, a boat capsizes then its team RIB should be first on the scene followed by another RIB with a diver ready to deploy immediately. Having RIBs swarming around a capsized catamaran all offering assistance, can create more problems than it solves.

Even for the Principal Race Officer there is much to consider in order to provide exciting racing while minimising incidents. The highly experienced David Campbell-James for example has added a straightforward windward-leeward to the list of courses that can be used and he intends to send boats off on this in strong winds. The GC32 Class Rules state that the maximum wind speed boats will race in is 25 knots, although in reality it is at the discretion of the PRO who could stop racing in 20 knots if he deems the sea state is too rough to ensure the safety of the boats and crews. The PRO also has the job to ensure that the start line and distance between the gates marks is enough to allow safe roundings.

And of course this is all easier with the four boats competing at the Test Event, but good practice for expected for Marseille One Design at the beginning of October, when seven-eight GC32s are expected.