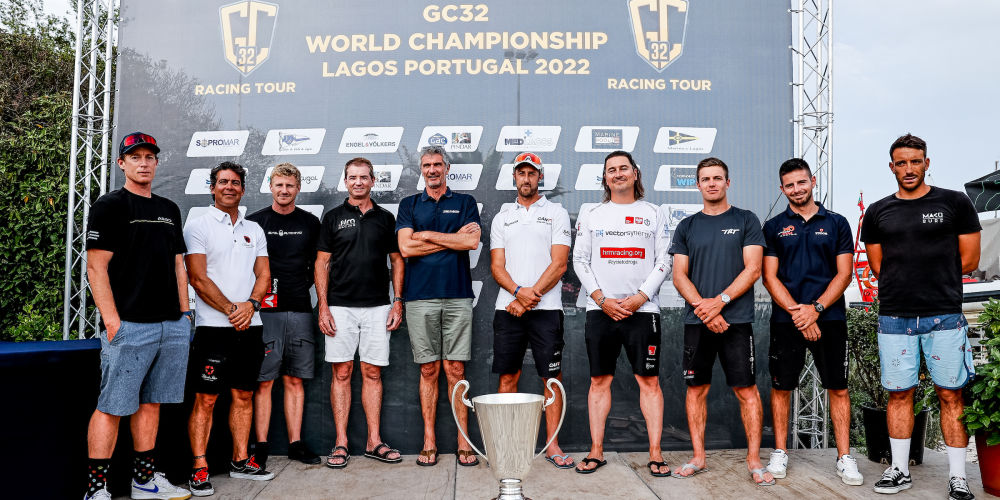 Ten teams from as far afield as Australia and the USA are competing from tomorrow until Sunday in the fourth GC32 World Championship, off Lagos on Portugal’s Algarve. The line-up includes America’s Cup winners, Volvo Ocean Race sailors, Olympic and World Champions and SailGP teams.

Favourite is Alinghi Red Bull Racing. The Swiss America’s Cup winners and current challengers won the two opening events of this year’s GC32 Racing Tour, including, just two weeks ago, the GC32 Lagos Cup. However the team’s regular skipper Arnaud Psarofaghis, who won the GC32 World Championship here in 2019, is tied up with America’s Cup commitments and has passed the helm to 24-year-old Maxime Bachelin.

“I am feeling very good,” says Bachelin. “I have been in touch with Arnaud who has been very helpful giving me advice and boosting my confidence. We feel ready to fight!” Bachelin steered the team’s second GC32, SUI 15, to fourth place at the GC32 Lagos Cup. He will be on board with ‘the Swiss supreme team’ including 470 Olympic bronze medallist Nicolas Charbonnier and long term Alinghi crew Yves Detrey. “It is difficult for me because they have a lot of experience on the boat, but obviously are more used to Arnaud. That’s down to communication, which we are still working on.” 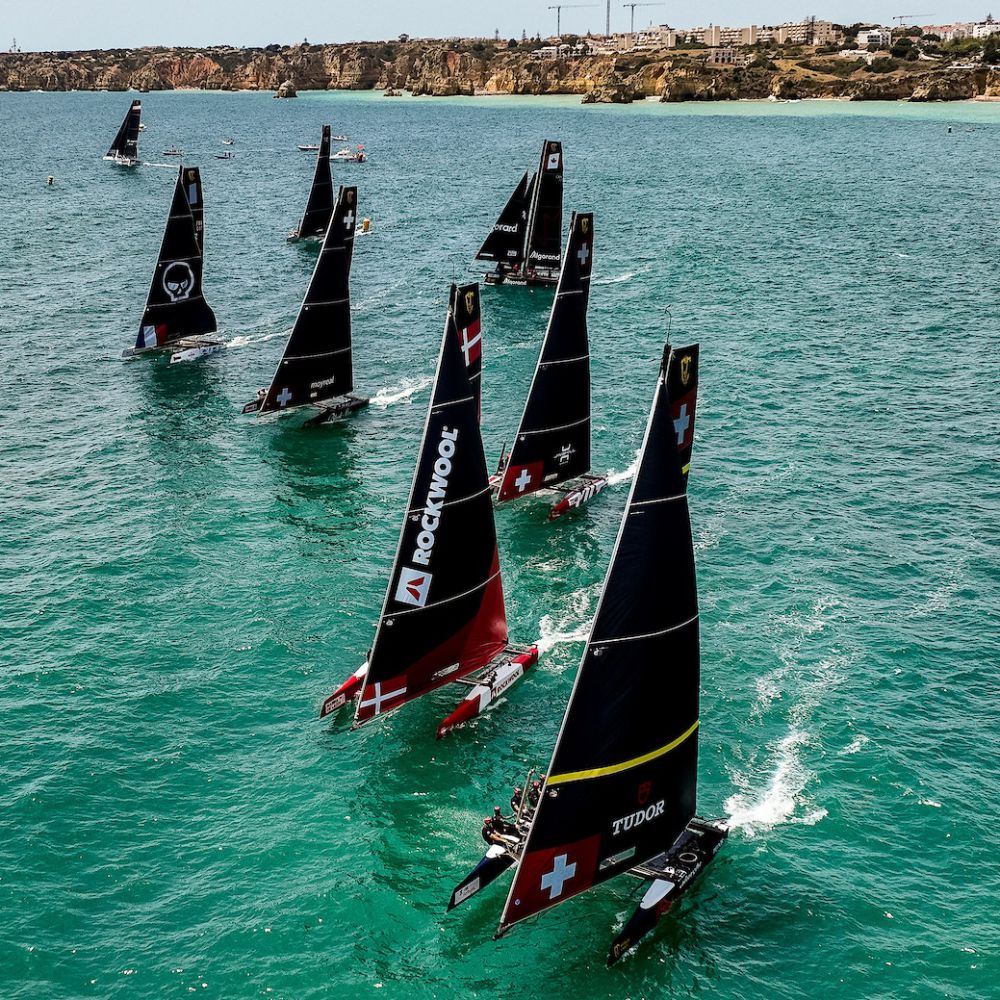 The sole GC32 World Championship winning skipper competing is Swiss Olympic 49er and SailGP helm Sébastien Schneiter, whose Team Tilt won in 2018. “Definitely it was a proud moment in my career,” says Schneiter. “It is my only World Championship title. Coming back to the Worlds is already a big pleasure. We have always finished on the podium. It would be nice to be on the top spot again.

“It is fair to say that without Arnaud [Psarofaghis], who is the best GC32 skipper, it opens up the game for the title. It will be quite variable conditions so we can expect a good mix in – everyone will have bad races. It will be anyone’s regatta to grab.”

Present pretender to the Alinghi Red Bull Racing throne is Team Rockwool Racing. They finished second at the first two GC32 Racing Tour events this season. Danish skipper Nicolai Sehested acknowledges this World Championship as a worthy title to win, so they have upped their game. “How we sail is similar, but we are more prepared, have better sails, etc. Everyone pushes harder for the Worlds – it is the one everyone wants to win.” They also have here their SailGP coach, Sehested’s former Volvo Ocean Race skipper Chris Nicholson and GC32 expert Adam Minoprio.

Sehested reckons half of the teams could win, but the form book may be upturned by the weather. Lagos is famous for providing optimum foiling via its strong offshore northwesterlies and flat water. This week, due to a depression off the Iberian peninsula, the forecast is for southeasterlies bringing less wind and larger waves. “That throws a spanner in the works for all of us. If you had steady breeze you know what you can expect from everyone – this week we don’t. You will probably see high scoring from all the teams.” 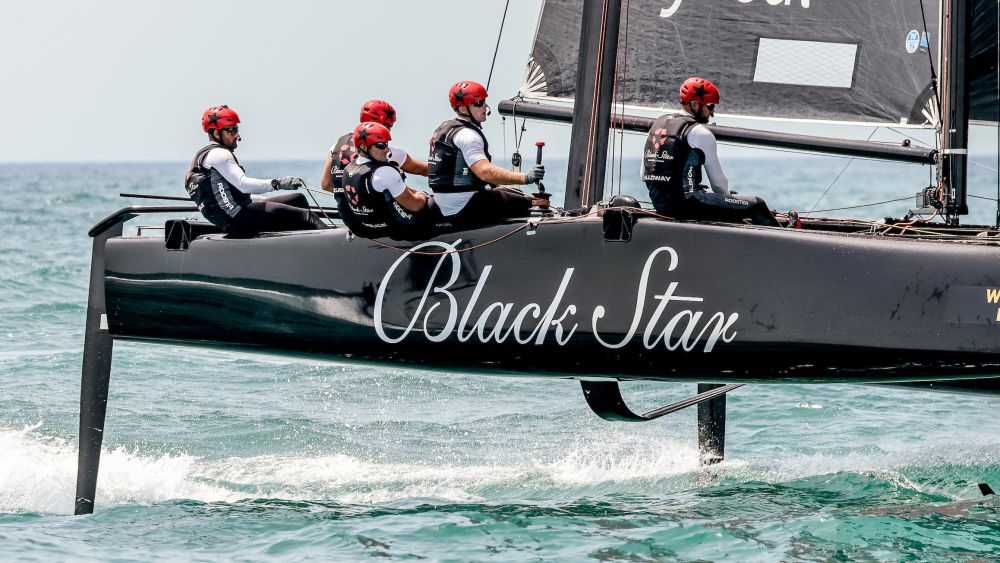 At the 2021 Worlds, Black Star Sailing Team’s podium position was robbed by Team Tilt. They hoped for more training before this event but have only managed one day. “The crew is feeling good and we want to show our ability,” says owner Christian Zuerrer. “Our goal is to take a step forward from last year. We will do everything to achieve that. Between ourselves, Alinghi, Rockwool, Team Tilt and Zoulou, it will be a close battle.”

Among the owner-drivers teams, the stand-out is Erik Maris’ Zoulou. Aside from leading the 2022 Owner-Driver Championship, Zoulou finished third at the GC32 Lagos Cup. Most experienced team on the circuit, Zoulou, it might be imagined, should make the best of this event’s tricky conditions. In addition to Simon Delzoppo’s .film AUS Racing and the new team from Poland – Piotr Harasimowicz’s HRM Racing Team – the owner-drivers are joined by Jason Carroll’s Argo with Laser Olympic gold medallist and America’s Cup sailor Paul Goodison calling tactics. 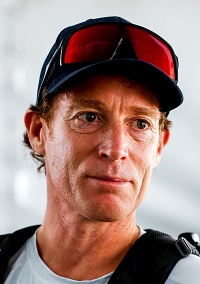 Goodison is unsure of how they will get on: “Conditions are going to be tricky with some big waves for the first couple of days so we have to get our head around that but Argo is a great team and Jason is a great driver. Sailing foiling boats in big waves is always very difficult.”

Goodison last raced a GC32 at the 2021 Worlds. “It is a really cool boat. It rewards good crew handling – there are ropes to pull and it is very physical – very different to sitting there holding a keypad! Sailing in a fleet with this number of boats is always nice and there are some teams now which are very slick.”

The GC32 World Championship is supported by the City of Lagos and Tourism Portugal, plus Sopromar, Marina de Lagos and Clube de Vela de Lagos.

Racing gets underway at 1300 tomorrow (Thursday) with five races/day scheduled until Sunday when the fourth World Champion will be decided.

UPDATE: Racing has been brought forward to 1000 due to the unruly weather conditions.