Stars of the sailing world congregate in Lagos

Olympic heroes, America’s Cup winners, Volvo Ocean Race champions and some of sailing’s most capped World Champions are in Lagos on Portugal’s Algarve for tomorrow’s start of the GC32 World Championship. The line-up for this second event on the 2019 GC32 Racing Tour, taking place with the support of the City of Lagos, Marina de Lagos and Sopromar, comprises ten teams from seven nations, from afar afield as China, the USA and Oman.

An 11th hour recruit for Sébastien Schneiter’s Team Tilt is Glenn Ashby, skipper of America’s Cup defender Emirates Team New Zealand. Ashby helped coax Team Tilt to win last year’s GC32 World Championship and has found time to sneak away from his Cup duties to help them defend it. However he admits: “My last yachting was the A-Cat Worlds in Queensland last November. The office hands are going well since I’ve had to start pulling ropes again.”

Ashby understands the importance of a world championship. Personally he is a ten time winner and defending champion of the singlehanded A-Class Catamaran Worlds. As to Team Tilt’s chances this time, he is realistic. This is the first time since they have sailed their GC32 since last year’s Worlds, so they have had to go back to basics.

As to Lagos, Ashby is impressed: “From what we have seen it is absolutely ideal – beautiful flat water 70% of the time and good breeze, sunny and warm. It is pretty much perfect for sailing foiling boats.”

He is not the only current America’s Cup sailor in Lagos. Sir Ben Ainslie, who is challenging with INEOS Team UK, is here with his INEOS Rebels UK team. Aside from being the most successful Olympic sailor of all time, with his unmatched tally of four golds and one silver, Ainslie also won the America’s Cup in San Francisco with Oracle Team USA, as did his GC32 jib trimmer Joe Newton. However most impressive is the number of Olympic medals on board the British GC32 – in addition to Ainslie’s haul is Giles Scott’s Finn gold from Rio 2016, where Iain Jensen won 49er silver, adding to his gold medal from London 2012. Their fifth crew is Luke Parkinson who won the Volvo Ocean Race with Abu Dhabi Ocean Racing.

“It is really nice to be back in Lagos – it is a great venue,” says Ainslie, who first raced the GC32 here last year. “We had some fantastic racing here last year and this time we have a few more teams and we’ve had a bit more practice in the boat. It is nice to have Team Tilt back to defend their title. They will be really strong with Glenn Ashby coming across from Team New Zealand, so there’ll be a bit of Cup rivalry!” 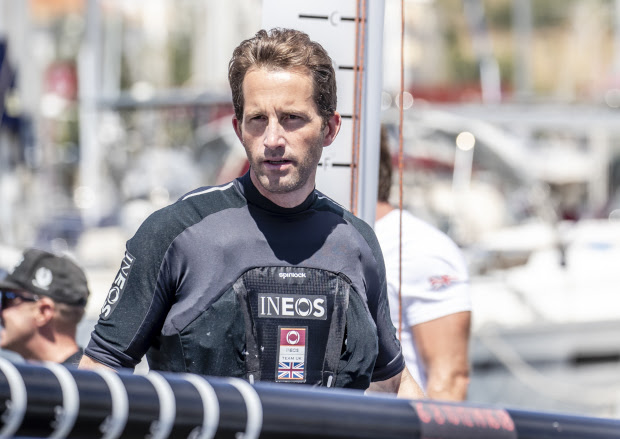 Above: Sir Ben Ainslie returns to Lagos with INEOS Rebels UK, a year on from joining the GC32 Racing Tour for the first time. Below: Franck Cammas and his NORAUTO team are defending champions in Lagos.
Photos: Sailing Energy / GC32 Racing Tour. 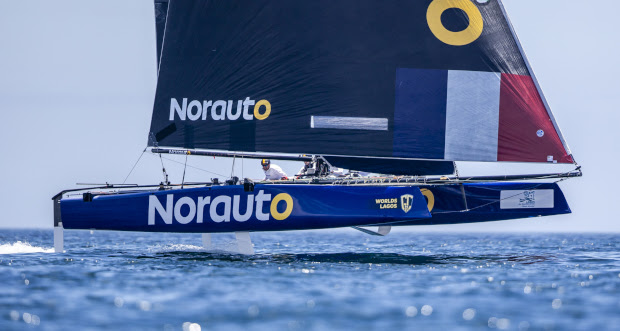 Equally accomplished, but in different spheres of yachting, is France’s Franck Cammas, skipper of NORAUTO. Among his accolades are winning the Volvo Ocean Race, France’s top offshore race the Route du Rhum, a former holder of the Jules Verne Trophy for sailing around the world the fastest, as well as being a multiple champion in the ORMA 60 trimaran class. He also won last year’s GC32 Lagos Cup.

“It is a good place to race,” says Cammas of Lagos. “It is normally flat water. We had two days last year with a strong offshore wind, which was very nice because it was flat but also shifty. Last year we had a good result, but the fleet is different this year. We hope to do better than in Villasimius [the first event of the 2019 GC32 Racing Tour]. There we had some good results and some bad ones, so we need to be more consistent. We are not far away, but we are not as steady as the guys in front.”

Cammas skippered the French challenge for the last America’s Cup in Bermuda and several of his crew from that are on board Erik Maris’ Zoulou, while another former America’s Cup skipper is France’s Seb Col, who is tactician on board Jason Carroll’s Argo this season. This week both Maris and Carroll will be gunning for the GC32 World’s owner-driver trophy.

One of the most successful sailing teams of all time is Ernesto Bertarelli’s Alinghi, two time winner of the America’s Cup, which is also won the last season of the Extreme Sailing Series.

Arnaud Psarofaghis is standing in here for Bertarelli, but denies there will be more pressure because it is a World Championship. “There is no pressure, but we have to win and we want to have some great racing. On the water it will be the same. Everyone will push hard, but teams may be more disappointed at the end if they don’t win the World title.” Alinghi has had a crew change since Villasimius with Nicolas Charbonnier moving on to main and tactics, Bryan Mettraux on trim, Yves Detrey on bow and Timothé Lapauw back from injury on board rake.

A third team from Switzerland, new for this season, is Christian Zürrer’s Black Star Sailing Team, on which four time Olympic Star sailor Flavio Marazzi is sailing. Two key crew on board Red Bull Sailing Team are also significant Olympians – skipper Roman Hagara and Hans-Peter Steinacher were gold medallists in the Tornado catamaran at both Sydney 2000 and Athens 2004.

Oman Air and CHINAone NINGBO are both skippered by New Zealanders who are former winners of the Match Racing World Championship. Oman Air’s Adam Minoprio claimed this title in 2009 before going on to compete in the Volvo Ocean Race. His Oman Air team comes to Lagos having won the first event of the 2019 GC32 Racing Tour in Villasimius.

CHINAone NINGBO is on a steeper learning curve. Skippered by 2016 champion Phil Robertson, he and his crew are fresh from campaigning the Chinese entry in the New York stopover of SailGP last weekend.

“We are a little bit behind the 8 ball but we’ll try and play catch-up,” admits Robertson. “The line-up looks tough and there are a lot of really good boats – all of the best guys are congregating at this event.” For this event, the Chinese team includes two more ‘Robertson regulars’ Will Tiller and James Wierzbowski.

Racing starts tomorrow at 1300 and concludes on Sunday. In addition to the regular racing will be the Cascade Sopromar Speed Challenge. In this the team recording the highest average speed will win five double rooms for three nights at Lagos’ 5 Star Cascade Wellness & Lifestyle Resort.