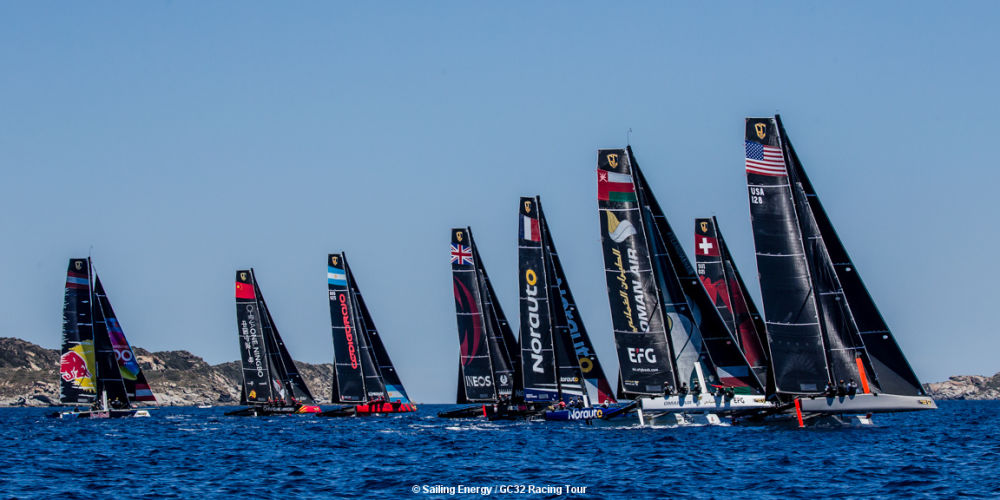 The 2019 GC32 Racing Tour sets sail tomorrow with ten of the one design flying catamarans completing in Sardinia at the GC32 Villasimius Cup.

Villasimius and nearby Capo Carbonara – the southeasternmost tip of Sardinia – are a jewel of a venue thanks to their mountainous backdrop and white sandy beaches, plus the azure waters and exotic marine life of Capo Carbonara’s protected maritime area and the Notteri pond with its pink flamingos. It comes as little surprise that Villasimius is popular as a destination not just for tourists but increasingly for yachting. This week’s GC32 Villasimius Cup represents the third consecutive year that the flying catamaran circuit has visited.

“It is a great pleasure to return to Villasimius, knowing that we’ve played a part in putting it on the sailing map,” says Christian Scherrer, Manager of the GC32 Racing Tour.

Welcome to the 2019 GC32 Racing Tour…Promo video from Icarus Sports
With ten teams competing at the GC32 Villasimius Cup, the line-up is the strongest since last year’s GC32 World Championship. With the Extreme Sailing Series now not being raced in GC32s, so Alinghi, Red Bull Sailing Team and Team Oman Air supported by EFG Bank Monaco have commuted across to the GC32 Racing Tour.

They are expected to be particularly strong: Alinghi, historically most successful of all the Extreme Sailing Series teams, is here with Ernesto Bertarelli helming. Oman Air has recruited one of the most successful GC32 helms of all time – former Match Racing World Champion and Volvo Ocean Race sailor Adam Minoprio. Red Bull Sailing Team sees the return of Austrian double Olympic Tornado catamaran gold medallists Roman Hagara and Hans-Peter Steinacher.

Cammas and his NORAUTO team start with the strongest credentials as defending champion of both the GC32 Racing Tour and of the GC32 Villasimius Cup. “It’s the second time we’ve raced in Villasimius,” says Cammas. “Last year we won the event. It’s going to be tougher this year, but we’ll try to sail well.” 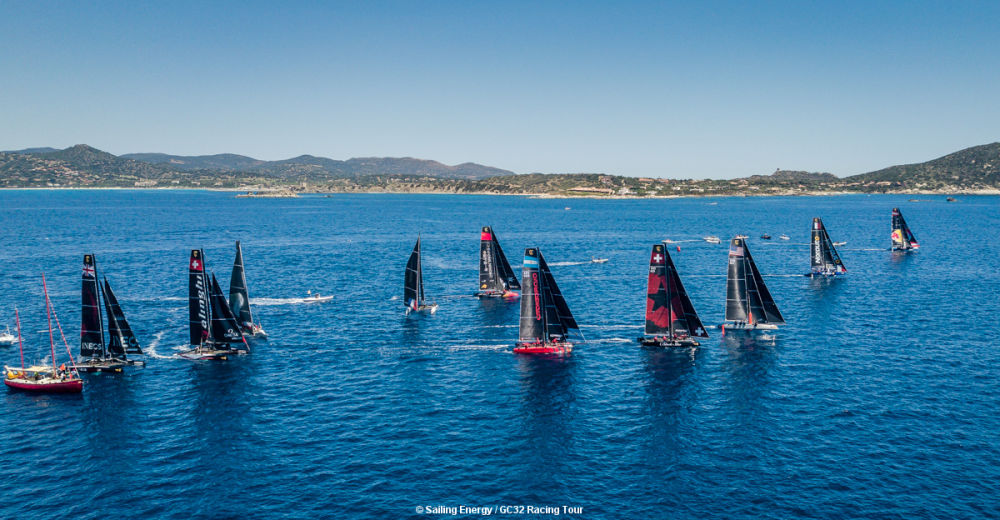 As to the level of competition, Cammas reckons: “It is much higher than last year, with the two fleets consolidated in one. The teams coming from the Extreme Sailing Series have top professional sailors, very well practiced because they had seven or eight regattas every season. Winning is going to be much harder.”

Representing the US, Jason Carroll’s Argo is also back, having won the Villasimius Cup when it was first held here in 2017. Argo is defending champion in the GC32 Racing Tour’s owner-driver championship. Argo is one of three teams competing here for the owner-driver prize, in addition to Alinghi and Erik Maris’ Zoulou. The French Zoulou crew has been putting in solid practice for this season, buoyed by finishing third overall last year.

Sadly, not competing in the owner-driver championship is the 10th and final team to announce its participation at the GC32 Villasimius Cup – Codigo Rojo Racing from Argentina. Sadly for personal reasons Federico Ferioli has has to pass the helm over to Guatemalan Nacra 17 sailor Jason Hess, a former a trimmer on board and now usually team coach.

“It’s going to be tough because it’s the first event now that the GC32s from the Tour and the Extreme Sailing Series are racing together,” observes Lucas Gonzalez Smith, Codigo Rojo’s Team Manager. “The level has gone up, with teams coming from the America’s Cup or SailGP. Everyone has come well prepared. We’re looking forward to seeing where we are in the fleet.”

A new team to the GC32 for this season is Black Star Sailing Team from Switzerland. Brainchild of former A-Class catamaran sailor Christian Zuerrer, this uses both Flavio Marazzi and his GC32 with a crew of Swiss and British sailors. Like Gonzalez Smith, Zuerrer, who will be on mainsheet, says he is keen to see where they are in this strong fleet. “We have a good crew. It is our first event. We will see how we go. We’ve had two training sessions in Port Camargue.”

With racing running from Thursday until Sunday 23-26 May, PRO Stuart Childerley is anticipating getting in up to 20 windward-leeward races with a mix of upwind and reaching starts, as conditions permit. The wind is forecast to be brisk tomorrow with 15-20 knot southwesterlies forecast before lightening temporarily on Friday.
Of the racing in Villasimius NORAUTO’s Franck Cammas observes: “The race area is very interesting, with different conditions. It’s nice but never easy, especially with westerly winds that can generate a chop – a delicate situation for foiling catamarans.”

“I’d like to thank all of the stakeholders in the event, but particularly everyone in Villasimius who helped once again enable the GC32 Racing Tour to visit your beautiful venue,” concludes Christian Scherrer.

The GC32 Racing Tour is supported by Marinepool, WIP Forward and GAC Pindar.