Stuart Childerley – from Olympian to GC32 Racing Tour PRO One of the strengths of the GC32 Racing Tour is the calibre of its staff from the multi-lingual, former America’s Cup and Volvo Ocean Race sailor that is its manager Christian Scherrer, to the over-qualified Stephanie Nadin who heads the corporate hospitality program (when she is not running SailGP’s French event in its entirety), to […] 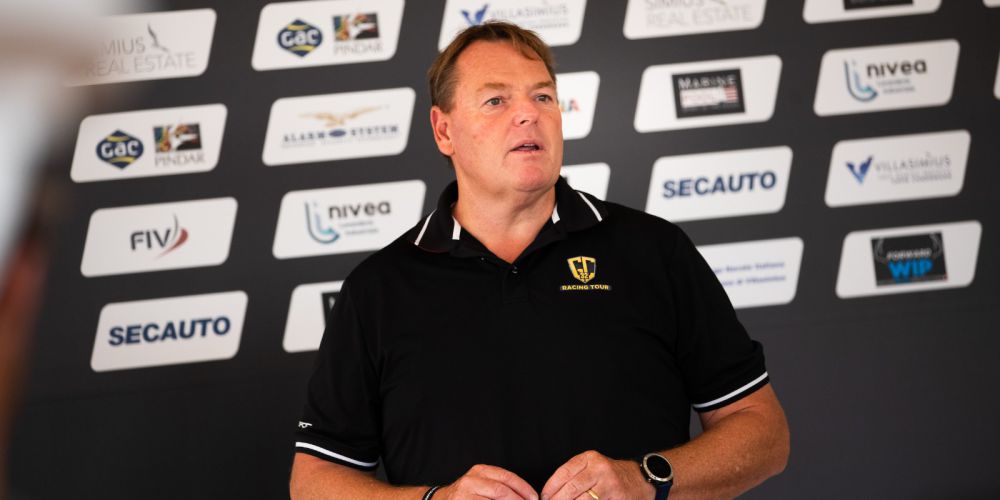 One of the strengths of the GC32 Racing Tour is the calibre of its staff from the multi-lingual, former America’s Cup and Volvo Ocean Race sailor that is its manager Christian Scherrer, to the over-qualified Stephanie Nadin who heads the corporate hospitality program (when she is not running SailGP’s French event in its entirety), to the 35+ years of experience across newspapers, magazines and websites of their chief communicator. One of the most accomplished on the payroll is certainly Principal Race Officer Stuart Childerley.

A top sailor of his generation, the 56-year-old Brit earned his first stripes in 1984 when he won the Youth World Championships in the Laser (an accolade claimed in other years by other top sailors like Russell Coutts, Dean Barker and Ben Ainslie). He went on to represent Britain in the Finn dinghy at the Olympic Games in 1988 and 1992 finishing a disappointing fourth on both occasions. After missing selection to Team GBR in the Soling for Atlanta in 1996, Stuart gave up professional sailing and instead joined the family aggregate business. Nonetheless during this time, he enjoyed much further success on the water, such as winning the One Ton Cup with Olympic medallist Ian Walker on the TP52 Patches, and coming out top boat in the Admiral’s Cup and winning the Tour de France a la Voile as part of the Barlo Plastics Team. During the early 2000s his was the boat to beat in the ultra-competitive Etchells keelboat fleet, winning back-to-back World Championships in in 2001 and 2002. He also raced on the Mini Maxi Alegre, winning the Mini Maxi Rolex World Championship in 2014. He even sailed two legs of the 2001-02 Volvo Ocean Race on Team News Corp. 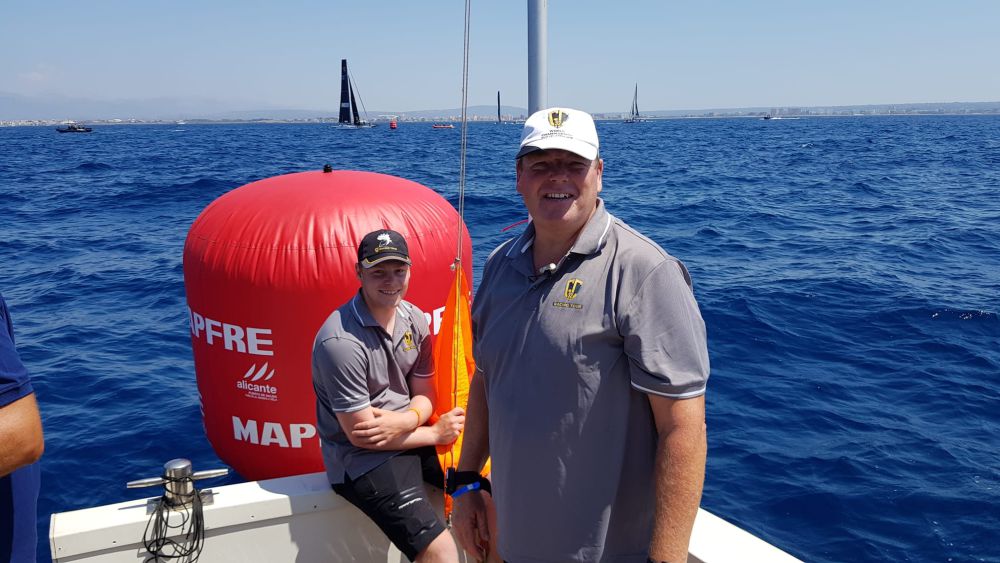 Stuart with son Ben, now working in the marine industry

In the late 2000s, Stuart’s children Ben and Abby got interested in sailing and he started taking them to Optimist events. “I am not good at chatting around coffee – I had to be doing something, so I got involved in race management,” admits Stuart about how he made the ‘poacher to gamekeeper’ transition. His first experiences in race management were in the Optimist fleet but he graduated up to big boats as race officer for the Hamble Winter Series (one of the major events on the Solent in the UK). En route to qualifying as a World Sailing-sanctioned International Race Officer, in 2014 he was taken on by his old Soling sparring partner Eddie Warden Owen to run all the inshore racing for the Royal Ocean Racing Club, such as the Commodores’ Cup.  He has since gone on to be race officer for the very highest level events in sailing, including being a World Sailing Course Representative at last year’s Olympic Games in Tokyo.

A significant landmark along this road came in 2017, when Stuart was appointed Principal Race Officer [PRO] for the GC32 Racing Tour. The GC32 was both his first foiling class and his first multihull class and required some rethinking of his approach: “As PRO there are many different considerations, but quality of racing and safety are at the top of your list. With most dinghy and keelboat races, the quality of racing just outweighs safety because the boats are slower and the history of their type of racing is good, but due to the speed of the GC32s, safety is always very much first on the list and quality of racing second.”

So what defines ‘fair’ racing? “It is about providing choice for the sailors,” Stuart explains. “The worst thing for a race officer is everyone being stacked up at one end of the start line and everyone going the same way up and down the legs – just a procession. So you always have to be thinking ‘what can I do to give everyone choice’? As long as they can keep making decisions they then have the option to improve their results or risk falling back.” 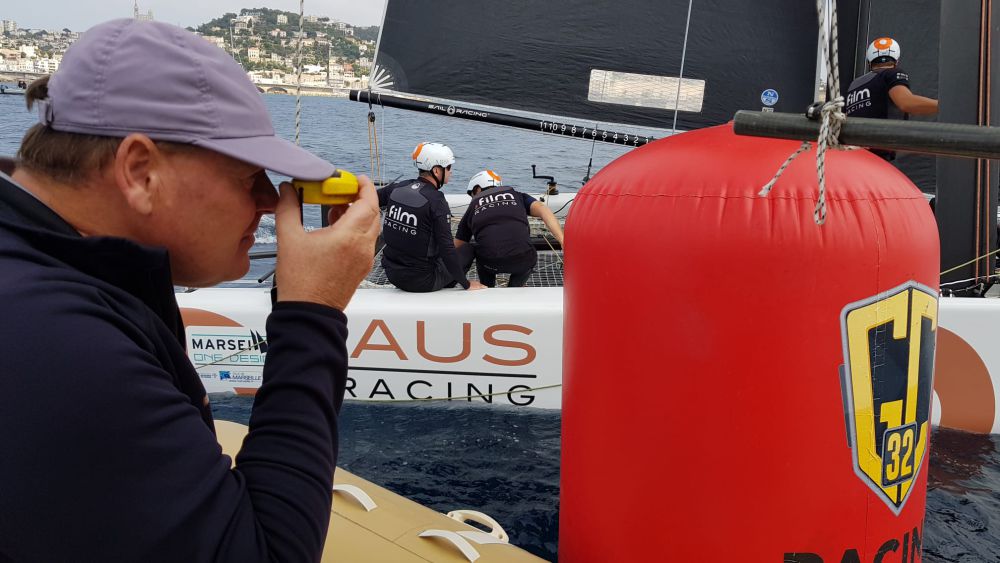 This approach came as a shock to the teams freshly arrived on the GC32 Racing Tour from the Extreme Sailing Series where ‘the spectacle’ was perhaps closer to the top of the list of the PRO’s requirements. “At that first GC32 World Championship on Lake Garda (in 2018) we had 12 boats and there were certainly lots of opinions kicking around,” continues Stuart. “As the PRO you listen to everyone and to the organising authority and you have to make a decision and off you go. But it was important to be consistent so we created a race management policy document.”

For example, up until that point the GC32 Racing Tour had exclusively followed the trend of the America’s Cup in adopting ‘reaching’ starts over the traditional ‘upwind’ starts still most common in keelboat racing. However after getting some experience of GC32 racing under his belt, and working with the teams, Stuart introduced windward starts in some wind strengths.  “The important thing with any event is understanding what is best for the sailors and for the boats. With the GC32 we quickly set some wind parameters which we have refined over the years. At present we have upwind starts in up to about 9 knots of wind; from 9 to about 17 knots we have reaching starts and then back to upwind starts from around 17 to 22 knots, by which stage you are beginning to question whether you should be out there…” However conditions when reaching starts are to be used is likely to broaden this season with more Sail GP and America’s Cup teams set to join the only World Sailing-recognised foiling catamaran circuit, outside of dinghy classes.

Across the GC32 crews there are a huge breadth of ages and experience and there is also a range of views with some teams generally favouring either reaching or upwind starts and lower or higher wind limits (which in fact are usually sea state, rather than wind speed-dependent). As to the upwind starts in light wind Stuart explains: “If it is ‘marginal foiling’ and you set a reaching start, one or two boats may get up on their foils and will be gone leaving the others behind wallowing and thinking ‘this isn’t much fun’. Then they look for who is responsible! I don’t like to be in that position, so we try and make it fun for everyone.”

Over the years he’s been delighted to see GC32 crews develop their sailing techniques, especially some teams introducing fresh techniques from the America’s Cup. “We saw Franck Cammas foiling upwind, sailing a little bit lower to get to his favourite corner on port tack,  foil tacking and then on starboard tack sailing the boat differently again.”

Coming from a more sedate monohull background, Stuart is today completely captivated by the GC32 flying speedsters and their 30+ knot speed potential, offering unprecedented bang for buck for crews looking to be part of the new wave of high speed foil-born racing. “There really should be more teams doing this,” Stuart muses. “Racing the GC32 is a great test of the crew – everyone comes in at the end of day having had a lot of fun. For the owner-drivers, it is challenging for them and for the teams to make sure the owner-drivers are having fun as well. Part of my job is making sure that it is reasonably even between them and the professional drivers. We have seen owner-drivers do very well against the pros and I’m sure there will be more.”

He continues: “The one design element of the GC32 is hugely attractive for getting a good fleet out racing regularly. When you have America’s Cup skippers racing against owner-drivers, it is fantastic. It is immensely satisfying to have five really good races and five different winners and everyone coming ashore to have a beer together and being really pleased with what’s happened. The socialising on the GC32 Racing Tour is brilliant and the corporate program lends itself well for guests to sail on board and meet the sailors.” Also defined in the race guidelines are the maximum wind speed when corporate guests are permitted on board the GC32s.

As to the future, Stuart would like to re-appraise the course formats, perhaps developing the traditional windward-leeward format with different lengths legs, possibly more reaching legs, etc to mix it up a bit. “It would be quite interesting to keep the focus on boat handling as well as the speed element. I think we could have a slightly slanted course orientation and perhaps one less mark in some conditions so that we force people to think about the course more. But people seem quite happy with windward-leewards, so perhaps we are doing the right thing.”

Stuart suffered a severe cycling accident last autumn but is on the mend and returns to lead GC32 Racing Tour proceedings on the water this season starting at the ever popular venue of Riva del Garda over 25-29 May. 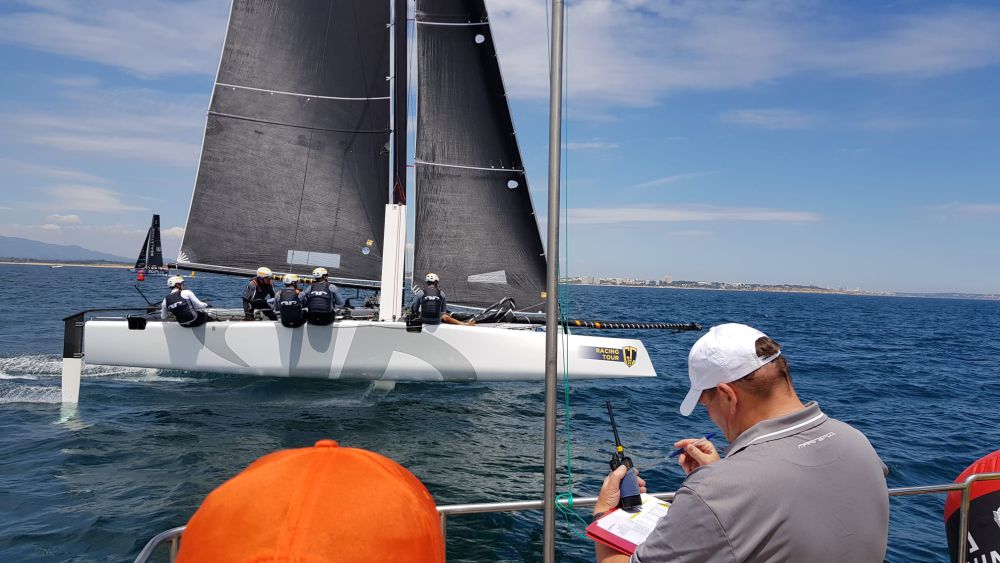