Technically helmsman Arnaud Psarofaghis and his crew on Alinghi Red Bull Racing – SUI 8 won the GC32 Riva Cup with two races spare. In reality, given the 24 point advantage they had earned prior to today, the GC32 Racing Tour’s defending champions could have stayed in bed today and still won by five points. Of the 16 races they sailed since Thursday they won half. They finished off the podium just once. They were a class apart.

“It feels great,” said a beaming Psarofaghis. “It is the first win for our new team, Alinghi Red Bull Racing. It is great to have done this. It was a super regatta: The fleet is stronger this year; every race was hard to fight for.”

Despite briefly faltering on the first day, the Swiss team then seemed consistently to go the right way, were fast and never broke. One theory is that now they are challenging for the America’s Cup they are elevating their game still further. Even in today’s first race when they were OCS they still recovered to second. “We’ve worked really hard on all the factors – the boat, strategy and the speed,” continued Psarofaghis. “This week we showed that one more time, but we still need to get better, because we are making a lot of mistakes, only less than our competitors…”

A consolation for the rest of the GC32 Racing Tour teams is that the same happened last season and by the second event the field has closed up again. 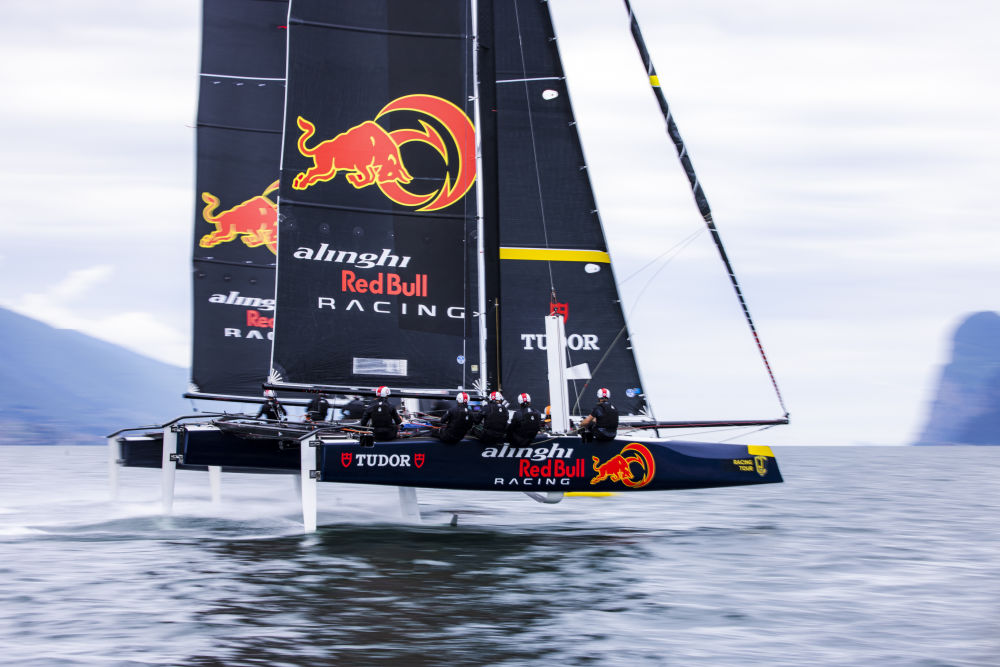 Today’s conditions were unusual. Following overnight rain storms, Lake Garda was overcast and threatening but this caused the northerly Pèler to remain blowing, at 10 knots when racing got underway at midday, then building into the high teens by close of play. The Swiss team’s tactician Nicolas Charbonnier described it: “It was really nice, shifting a lot and gusty, so there were more options for the tacticians. I just tried to get into a good line of pressure. It was not ‘normal Garda’ so you forgot that and just kept your eyes open.” At times today the cliff on the west side of the course was strong but the middle and opposite side too.

Today each of the five races had a different winner, excluding GC32 Class Association President Simon Delzoppo’s .film AUS Racing, new returnees to the GC32 Racing Tour after a three season absence and the Swiss America’s Cup team’s second team on Alinghi Red Bull Racing – SUI 15 led by Maxime Bachelin. Nonetheless today .film led for much of one race, while, after their team mates, SUI 15 was the most consistent never scoring worse than a fifth.

Team Rockwool Racing won the first race only to be let down by breakage. “We had a pretty good first event of the season,” summarised skipper Nicolai Sehested. “But we had a lot of boat issues. Today we destroyed our Cunningham which is inside the rig so you can’t actually fix it. We sail pretty well and we are happy with coming second in our first GC32 event this year.”

Christian Zuerrer’s Black Star Sailing Team bookmarked the GC32 Riva Cup winning its first race on Thursday and the last today. Like everyone apart from Alinghi they have lacked consistency this week, said their top Italian crewman and America’s Cup sailor Pier Luigi de Felice. “We had a hard week. We had a capsize on the first day after we had won the first race. We felt pretty strong and where we wanted to be coming into this event, with our preparation. But we’re not where we want to be, although we still ended up third. We had a lot of ups and downs – lost a lot of points on the race course, but we need to keep working over the rest of the season.”

De Felice added of the venue: “Lake Garda is beautiful. I have been sailing here since I was a kid and love coming back. The lake is so good for foiling boats. I hope we come back next year.”

While Alinghi Red Bull Racing – SUI 8 dominated the GC32 Riva Cup, the competition was much closer in the event’s Owner-Driver Championship. Erik Maris’ Zoulou led the event overall at the end of day one, but it went to the wire today when Jason Carroll’s Argo won today’s third race taking the lead by a point. Sadly for the US team, Zoulou won the next race as they scored a deep result, handing the trophy to Maris.

“It was a busy day after a good few days ‘in the office’,” said Maris, happy to be back on aboard foiling catamaran he began campaigning in 2014. “Everyone is at the top of their form. Alinghi is almost in a class of their own, but then there were four boats neck and neck from Black Star to Argo. It was fantastic racing. The fleet is very tight and when you make a mistake you go from hero to zero very quickly.”
Maris added “we should be thankful that for the two other owner-drivers who come from America and Australia to race with us.”

The GC32 Racing Tour now moves on to the first of two events in Lagos, Portugal, the first over 22-26 June followed by the GC32 World Championship over 13-17 July. 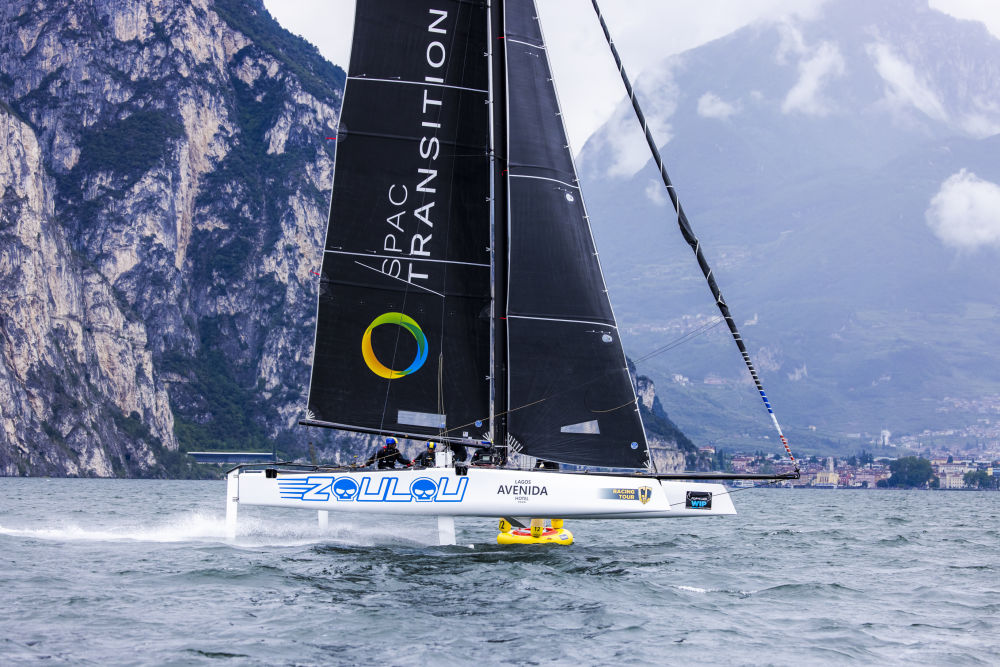