After the storms, torrential rain and general greyness of the last days, the Rade de Toulon was in an entirely different mood for day two of the GC32 TPM Med Cup, the final event of the GC32 Racing Tour, held with support from Toulon Provence Mediterranée and the city of Toulon.

A swell remained rolling in from the east, drummed up by the previous days’ strong winds, but it had decreased and conditions were otherwise those for which the Cote d’Azur is world famous, with 10-15 knot winds and the sun in a clear sky.

Star of the day was unquestionably Ben Ainslie and his America’s Cup crew on board INEOS TEAM UK. The British team won three consecutive races of today’s five, coming second in the remaining two. This was despite being called over early in the first race – today’s only race held with a reaching start (due to a wind shift, the latter four races had upwind starts).

“We had a really good day,” said Ainslie, the most successful Olympic sailor in history, racing on board his black catamaran with two other Olympic gold medallists – Giles Scott (Finn, Rio 2016) and Australian Iain Jensen (49er, London 2012). “The guys did a great job sailing the boat well and the boat handling most of the time was really good. I’m pleased Giles is back, helping with some of the moding and tactical calls. It was one of those days when it clicked.” 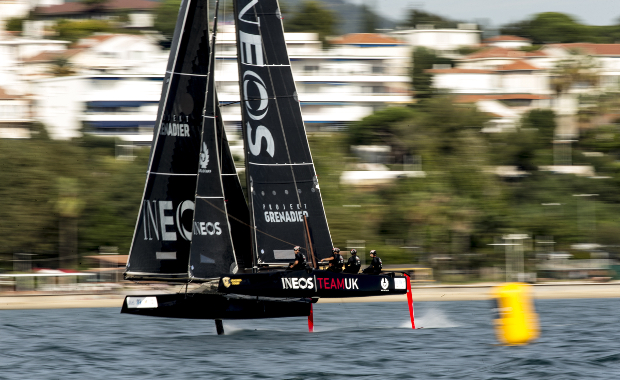 And the British sailing legend was hardly playing it safe. In the third race he ‘port tacked the fleet’ at the start, crossing ahead of boats charging the British boat down, with starboard tack rights. “That was a bit high risk!” admitted Ainslie. “It actually wasn’t our plan – we meant to go behind the fleet and go out to the right, but a gap opened up so we went for it and made it work… thankfully.”

Ainslie’s outstanding performance was welcomed by Jim Ratcliffe, CEO of INEOS, who was watching the racing from the team’s support boat.

In today’s opening race there was some Swiss heart-ache and pain. Having made the best start, Realteam pulled into the lead only for her mast to break on the second downwind leg. “We just had to finish the race,” admitted skipper Jérôme Clerc with a sigh. No one was injured, but this sadly follows Realteam having broken their usual racing mast in training prior to the GC32 TPM Med Cup. The Swiss team will be burning the midnight oil tonight as they attempt to repair their first mast. “It was going very well. It will be hard for us to come back now,” concluded Clerc.

This race ended up being won by Erik Maris’ Zoulou. “We did benefit from our competitor’s attrition,” admitted Maris. “I hope Realteam will make it back to sail tomorrow.”

Pleasingly Zoulou shares the same points, but is technically ahead on countback, with the event favourite, Franck Cammas’ NORAUTO (many of Zoulou’s crew sailed with Cammas in the America’s Cup last year). “We would like to stay ahead of Franck!” said Maris. “Today we had our usual ups and downs. In the second race I made a terrible mistake fishing one of the marks. Then we broke one of the winches.” Nonetheless Zoulou ended the day in third place and technically top of the three French teams competing here. 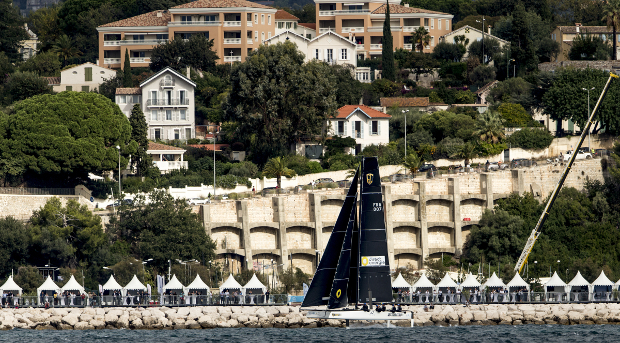 Today’s final race was claimed by Simon Delzoppo’s .film Racing. According to the Aussie team’s French tactician, Sébastien Col, they started well, were fast and made it out to the favoured left side of the course. Here there was not only more pressure but an impressive turn-out, along the marina breakwater, of Toulon’s sailing fans.

.film then stuck to their ‘left is best’ strategy. “On the second upwind, several boats went right like INEOS and I was thinking we should cover them, but all of the guys said ‘no, no – there’s more breeze on the left…” said Col. The tactic worked for .film finished with a substantial lead.

Racing continues tomorrow with another five races scheduled but also with two rounds of the ANONIMO Speed Challenge. The team with the highest average speed in this will win an ANONIMO Nautilo GC32 Racing Tour limited edition timepiece at Sunday’s prize giving.