Thumbs up for the GC32 after successful Test Event The Test Event provided a great indication of the racing we can look forward to: The spectacle of the gravity-defying foiling boats, particularly as they simultaneously scream off away on their reaching starts at speeds exceeding 30 knots. 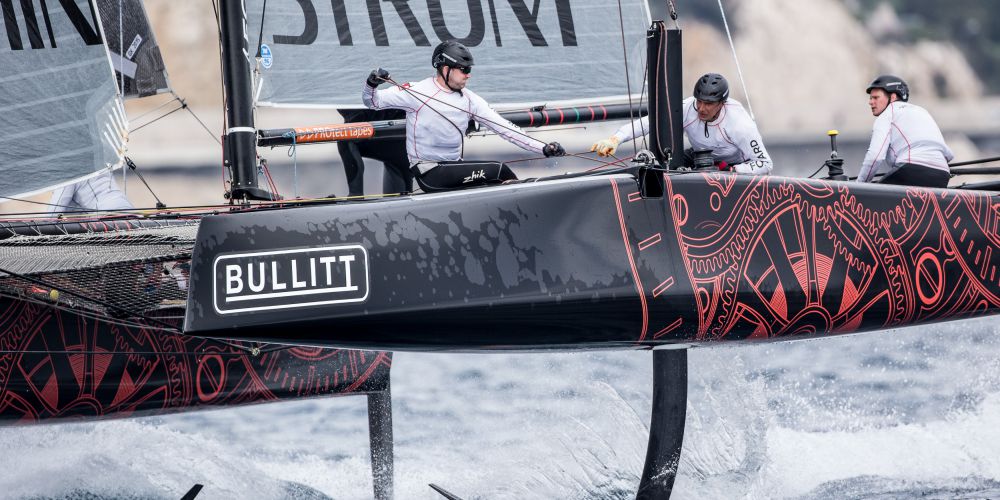 Thumbs up for the GC32 after successful Test Event

With 25+ knot winds blowing, the final day of the Marseille Test Event for the 2015 Bullitt GC32 Racing Tour, racing was cancelled. However over the previous three days, 15 races had been held in conditions ranging from 3-20 knots, providing the four teams with the most valuable learning experience prior to the Tour’s first event on Lake Traunsee, Austria over 27th-31st May.

The Test Event provided a great indication of the racing we can look forward to: The spectacle of the gravity-defying foiling boats, particularly as they simultaneously scream off away on their reaching starts at speeds exceeding 30 knots. The quality of the racing already seems good with regular position changes and different winners – after 15 races, ARMIN STROM Sailing Team claimed honours, but was just four points ahead of Alinghi.

For this regatta America’s Cup helmsman and expert foiler Chris Draper was standing in for Flavio Marazzi on ARMIN STROM: “It has been really good fun and there have been some great sailors to sail against – it has been good watching them picking up foiling so quickly.”

Draper believes the GC32 has a great future: “If you think about the money people are spending on their other boats and campaigns, and you think about how much fun they could have here… It is really a viable boat for someone to drive who isn’t a pro. You probably aren’t going to win a lot, but you are going to have some serious fun. And it is not that expensive. We had four boats here, but the boat is so accessible, you could see it going nuts.”

Of the four teams in Marseille two – Alinghi and Spindrift racing – were complete novices in the GC32, but are of such high calibre that they were soon winning races.

Alinghi overtook Spindrift racing overall on Saturday with Team Principal Ernesto Bertarelli helming for three races and promptly scoring 2-1-2, despite it only being his fifth time out on the GC32.

“I enjoy it immensely,” said Bertarelli. “I find the boat exciting, but safe at the same time. It is a huge learning curve compared to other multihulls I’ve raced, but one that is approachable and affordable. I think it is a good owner’s boat.” 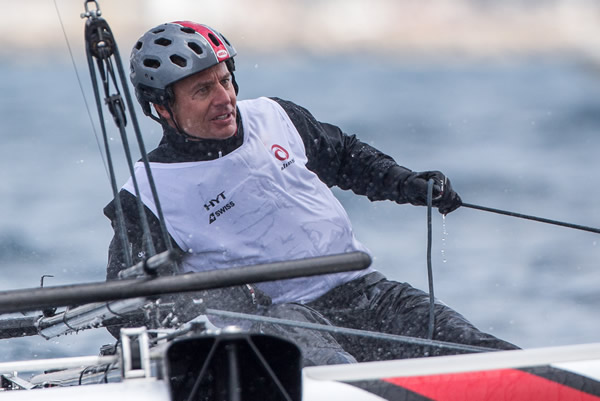 According to Alinghi stand-in helmsman Morgan Larson, this is the most enthusiastic he has ever seen Bertarelli. “It was probably a little daunting for him – it was daunting for me! But once you get behind the tiller and get a few races under your belt, you realise it is achievable and that you are not just surviving out there on the track, but you are racing. There were moments it felt like a wild beast out of control, but 80% of the time he was thinking ‘I can race this thing and with a little practice I’ll get better’.”

As for Alinghi, this was also the cat foiling debut for the highly experienced Spindrift racing crew and skipper Yann Guichard: “This event was good for us, because the GC32 is completely new for me and my team and the feeling at the helm is a bit different. It was really important for us to be here. I’m surprised how fast and stable the GC32 is – although I could be more stable! We have to spend time on the fine tuning – the right rake on the rudder and the T-foil, etc.”

After years campaigning multihulls, Guichard is relishing being at the sharp end of the ‘foiling revolution’, one of the most significant developments ever in sailing. However he is also looking forward to the competition on the Bullitt GC32 Racing Tour. “The level of the guys is very high, which is good for the circuit and good to make improvements.”

On the steepest learning curve, coming from a completely different avenue of sailing, is Sebastian Rogues and GDF Suez. “This was the first event with some of the teams who want to race the season on the GC32,” said the former Class40 champion. “Now we know what we have to do to get better in the next event and for all season – that is why we came here.”

Teams will now return to their bases to continue training prior to the first event of the Tour proper, in just one month’s time.