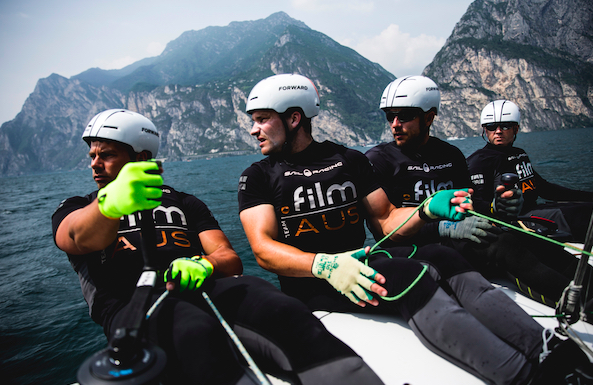 Going into its final day, this inaugural GC32 World Championship appears to be a two horse race but with five races still to sail, in theory the top 11 teams remain in with a chance of victory. Nonetheless two teams are dominating: Sébastien Schneiter’s crew on Team Tilt holds a two point lead over Jes Gram-Hansen and Rasmus Køstner’s SAP Extreme Sailing Team, in turn with a 14 point cushion to Oman Air in third. Four boats are currently within seven points of the podium’s bottom rung.

Conditions south of Riva del Garda were sensational for a second day with the southerly Ora in the high teens for today’s first three races before dropping slightly, and then completely in race five which the race committee wisely shortened.

SAP Extreme Sailing Team notched up three bullets today, but remains short of the overall lead thanks to yesterday’s OCS.

For much of the day the wind strongly favoured the right side under Riva del Garda’s famous cliff face, limiting tactical opportunities but placing a premium on boat handling. “The further you get up to ‘the wall’, the more wind you get and the more right hand the pressure is,” explained SAP Extreme Sailing Team helmsman Adam Minoprio. “You might end up overlaying, but you can just tack over and foil into the top mark. In the first race, we foiled into the top mark at 25 knots because the wind had gone even more right. We tacked at the same time as INEOS Rebels UK, who was on layline, and we rolled them going 10 knots faster…” Foiling upwind, Minoprio said they were doing 20 knots at 55° TWA.

The crew on Team Tilt, including Emirates Team New Zealand’s America’s Cup winning skipper Glenn Ashby, for a second day in a row never finished a race lower than fourth – an incredible display of consistency. The red boat also came out on top in today’s round of the ANONIMO Speed Challenge.

Ernesto Bertarelli’s Alinghi still commands the Owner Driver ranking on 62 points to second placed Jason Carroll’s Argo on 101. One of the best performers today was Erik Maris’ Zoulou, whose score today would have matched Alinghi’s had it not been for a collision with Argo for which the umpires awarded Zoulou four penalty points.

“We had a way better day than yesterday,” said Maris. “We found something different, we were closer to the front end of the fleet. The wind was slightly lower than yesterday towards the end and apart from a little crash with our friends from Argo in the third race, the day went pretty well.” Both Zoulou and Argo are out of the water this evening, the French team having its boat’s port bow fixed and the American GC32 having a hole in its transom repaired. Both will be racing tomorrow.

Team México came within a whisker of being in the boatyard too after a near pitchpole, from which the young crew impressively recovered. “At the top mark there was a puff as we tacked and were going for an early deploy,” explained skipper and foil trimmer Erik Brockmann. Sadly the Mexican GC32 is still recovering from scoring maximum points in three races yesterday as they fixed a broken main halyard.

“We have only had 10-15 days on the water and every day is an improvement. Today we went out and we were sailing better and better.”

Although he has owned his GC32 Frank Racing for a couple of years, Simon Hull is sailing his first European event against the top international teams here. Today in the final race, the Kiwi team managed to pull off a third. “On the last beat it got pretty light, but the boys called it and we went over to it,” explained Hull.

Hull is enjoying Garda’s exceptional conditions: “It is wonderful – a good venue and we’ve finally had some wind. I’m really enjoying it. We’re on a learning curve: Yesterday were my first reaching starts in this boat because we just never get them in NZ.” He is also getting to sail against many titans of the sport: “There are some fairly daunting names and a lot of experience. So when you have a race and you crossing tacks with these guys, it is quite fun.”

To try and make up the lost schedule from day 1, the race committee is looking to make most use of the northerly Peler wind tomorrow, with the intention of having a first warning signal at 0830 CEST.