Welcoming back old and new: Teams unveiled for 2021 GC32 Racing Tour A mix of teams, both old and new, will be taking part on the GC32 Racing Tour in 2021. In one month’s time, the World Sailing-approved circuit for high performance 32ft one design flying catamarans gets underway with the first of two events in Lagos, Portugal. These are followed by the GC32 World Championship in […] 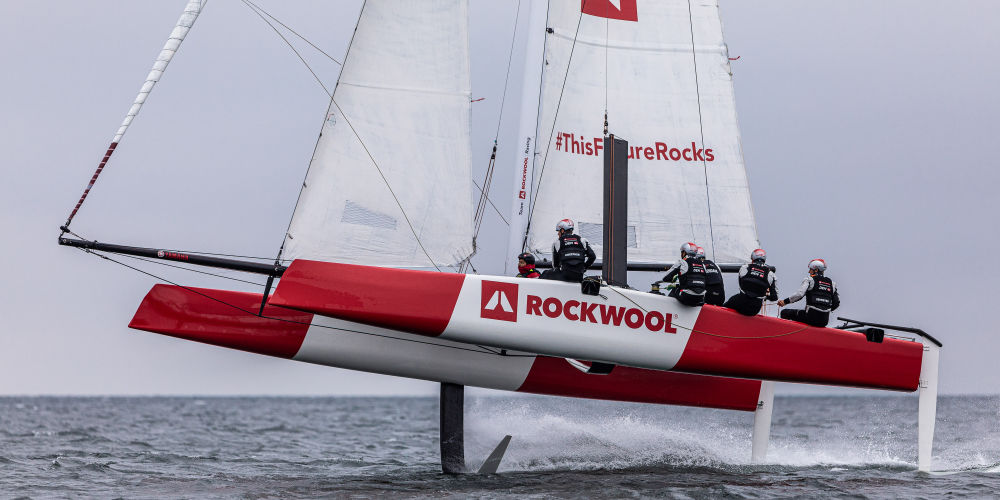 A mix of teams, both old and new, will be taking part on the GC32 Racing Tour in 2021. In one month’s time, the World Sailing-approved circuit for high performance 32ft one design flying catamarans gets underway with the first of two events in Lagos, Portugal. These are followed by the GC32 World Championship in Villasimius, Sardinia in September, with the season’s grand finale on Spain’s Mar Menor in early November.

One of the longest serving GC32 skippers is France’s Erik Maris, who first raced his GC32 in 2015. In addition to being a keen endurance motor racer (last year he competed with the Eurointernational team in the LMP2 class at the 24 hours Le Mans), Maris has a long, successful history in grand prix sailing, being a past Swan 45 European and Mumm 30 World Champion. Having finished third overall on the GC32 Racing Tour in 2018 and winning its Owner-Driver Championship in 2019, Maris returns this season with his same crew, led by America’s Cup veteran Thierry Fouchier.

“Zoulou is really impatient and excited to rejoin the GC32 Racing Tour and get back on our favourite flying machine after 18 months away,” says Maris. “We love our GC32 and we look forward to starting in Lagos and the season ahead.” 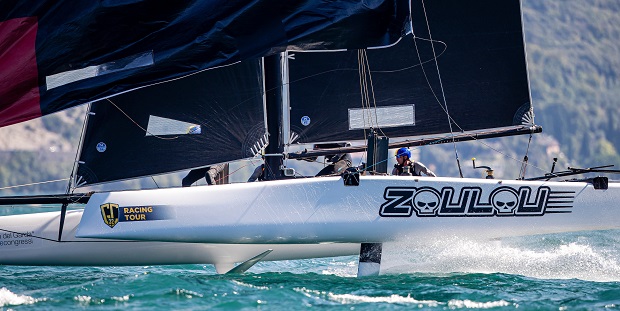 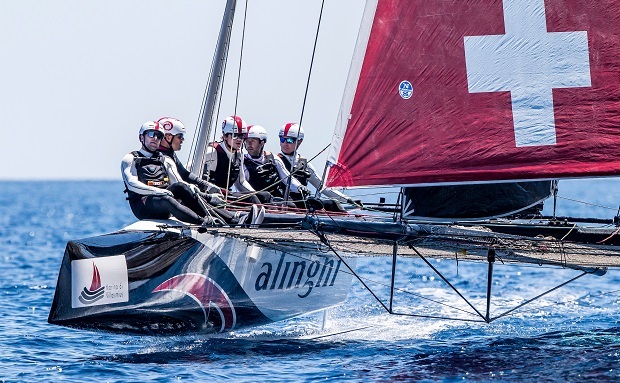 Unquestionably one of the most successful GC32 teams is Alinghi, of two time America’s Cup winner Ernesto Bertarelli. In 2019 the Swiss team was the GC32 Racing Tour stand-out performer, winning the season and claiming victory in three of the five events, including the GC32 World Championship.

As in previous seasons, Bertarelli will be sharing the helm with Arnaud Psarofaghis. “I am really looking forward to getting back on the GC32 and being part of the circuit again after such the long break,” said Psarofaghis. “I hope it will be like riding a bicycle!”

In 2019 it was in Lagos, Portugal that Alinghi won the last World Championship. Unsurprisingly Psarofaghis is delighted the first two 2021 GC32 Racing Tour events will be held there at the end of June and end of July. “It will make things easier for all of the teams and you can practice in between which will give us more time to get up to speed after a one year break.”

The 2021 season will mark the grand finale for two of the most successful sailors not just on the GC32 Racing Tour but in top level multihull racing generally: Austrian double Olympic Tornado gold medallists Roman Hagara and Hans-Peter Steinacher of Red Bull Sailing Team will retire at the end of the year.

Hagara wishes to go out in style: “Our goal is to really fight for the podium spots in each event while the big overall goal is to top the leaderboard at the end of the year. We don’t know how the other teams will perform because we’ve had a very long break and no one has been really practising and there is little preparation. It will be exciting to see how the other teams go and how we’ll get on when we come to race.”

The intention is for Red Bull Sailing Team to compete with the same crew as in 2019. 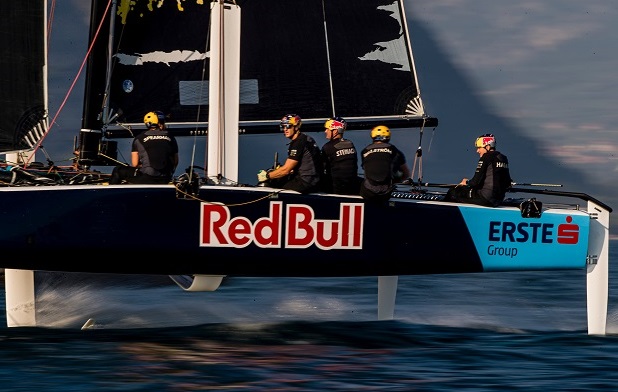 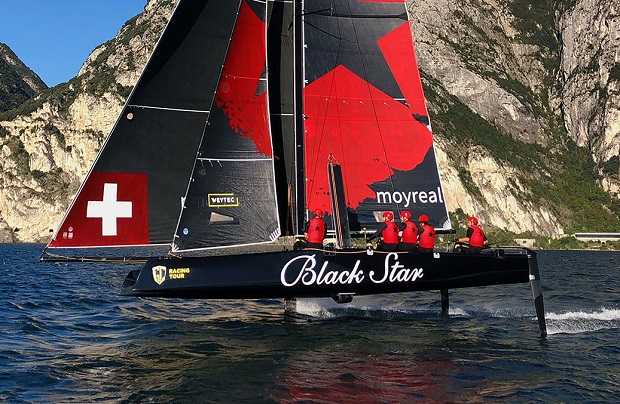 One team that has managed to get in some practice in recently has been Christian Zuerrer’s Black Star Sailing Team, which has been corporate sailing and even put in some training with their race crew on Zuerrer’s local Lake Lucerne in Switzerland. “We were the ‘training world champion’!” quips Zuerrer, who this season will again trim, while Chris Steele helms. “We spent nearly a month in Switzerland sailing – it was a great time, fun for the whole team. We were hiking in the mountains as well.”

Black Star Sailing Team, which joined the GC32 Racing Tour in 2019, has a significant addition to its crew this season in Pierluigi de Felice, fresh from racing the 36th America’s Cup with Luna Rossa. One of the world’s best trimmers he also has GC32 experience with SAP Extreme Sailing Team.

“It think this year it will be easier to get to a better level than we were at in 2019,” continues Zuerrer, adding as to the new season: “To have two events in Portugal is perfect. I really appreciate the organisation over there. We had a perfect time there during the Worlds two years ago. I am happy to go back to Lagos.”

Two new teams are set to join the GC32 Racing Tour this year.

Team Rockwool Racing has made its high profile entry as the Danish team in SailGP and also will be looking to hone its skills on the GC32 Racing Tour. Led by the young, highly experienced former match racer/Volvo Ocean Race sailor Nicolai Sehested, the crew line-up includes former SAP Extreme Sailing Team co-skipper Rasmus Køstner and Oracle Team USA wing trimmer Tom Johnson. With such personnel, Sehested says “when we start racing the GC32, hopefully we won’t have to spend too much time learning how to sail it. The GC32 is a boat you can throw around, yet it is still fast and exciting. I think it is really good fun, but the best thing about it is the one design class. You have other identical boats racing against you.”

With a similar remit, only in Switzerland, is another new GC32 Racing Tour team – Swiss Foiling Academy. Born of the D35 catamaran campaign Veltigroup/Swisscom, backed by MOD70 and Race For Water creator Marco Simeoni and two other donors, this is led by sailmaker Julien Monnier with Loïc Forestier (ex- Realteam) helming. It aims to train up ‘ordinary’ Swiss sailors aged 18-25, aboard its fleet of Flying Phantom catamarans, and now its GC32 (ex-INEOS Team UK). “It is a new challenge. It is a foiler, but otherwise it is close to the D35,” says Monnier.

Interestingly Swiss Foiling Academy will make use of the GC32 Racing Tour rule that permits an additional crew if two or more of the crew are female. As a result they will sail with six, including Louise Thilo and Amanda Anastassov.

Further teams from further afield will be joining the GC32 Racing Tour later in the season once international travel restrictions have eased up. 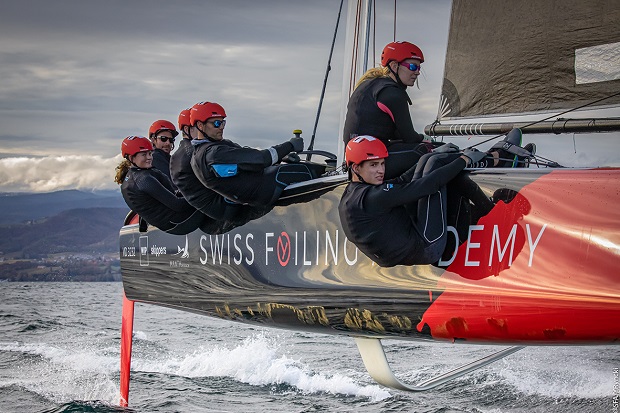