Youth teams at the GC32 Riva Cup Three youth crews, all aged 18-24, will be competing on Italy’s magnificent Riva de Garda this week using the GC32 Riva Cup as part of their final training for June's Red Bull Youth America’s Cup in Bermuda.

One of the biggest unknowns among the 11 teams competing this week at the GC32 Riva Cup will be the three with youth crews, all aged 18-24. Gathering in Italy’s magnificent Riva de Garda, where racing will take place from Thursday 11th May to Sunday 14th May, the trio will use this opening event of the 2017 GC32 Racing Tour, as final training for the Red Bull Youth America’s Cup, which starts in one month’s time in Bermuda.

This week Team Tilt will sail with the same crew as they had for February’s GC32 Championship in Oman, also the same as for Bermuda.

“I am very excited to see how we will get on,” confides Schneiter. “We know we have got the GC32 skills – we had some good racing in Oman and we have been training a lot since then and have improved. We know we can win races. Now it’s a question of seeing how consistent we can be.”

A year ago, the GC32 Riva Cup was Schneiter’s first event in the GC32. He is a big fan of Lake Garda: “There is always some action. With good breeze and flat water, you can get really high speeds.” Having 11 boats on the start line will also be good practice, particularly flying into the first mark at 30+ knot speeds. “It is a good feeling. We are really looking forward to that and the fight with all the other teams.”

In comparison the two other youth teams have more time on the water in foiling catamarans, but lack racing hours. Team France Jeune is associated with Groupama Team France, whose skipper, Franck Cammas, steered NORAUTO to victory in the 2016 GC32 Racing Tour. 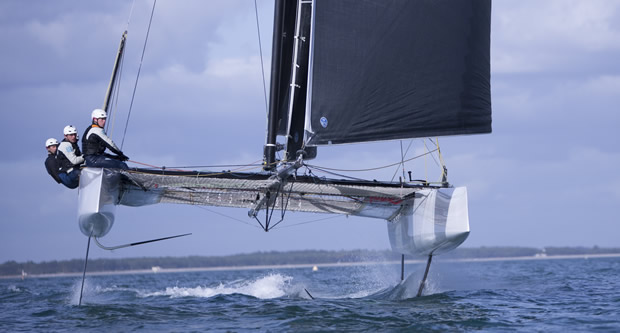 According to Team Manager, Louis Viat, selection for Team France Jeune began in November 2015. Last year their squad was narrowed to 15 and spent three months training in the GC32. In December was further reduced to eight – all coming to Riva this week. This spring the team has continued training in Brittany.

Skipper and helmsman, Robin Follin is a leading match racer and was crowned French champion in this discipline in March. Tactician Valentin Sipan is an Olympic 470 sailor while the rest are either from Follin’s match racing crew or have experience in Olympic or multihull classes such as the F18. Bowman Tim Lapouw has spent a year in this position on Alinghi’s GC32.

While France has a population of 67 million from which to choose its crew, Bermuda has just 65,000. Despite this they have managed to put together a competitive team. Since last year they have been training in Bermuda on a GC32 under coaches GC32 sailor Michael Barnes and Canadian Volvo Ocean Race winner and Olympic veteran Richard Clarke.

Team selection for Team BDA began in August 2015 and since January their squad has been full time on the GC32. “We have put in a lot of hours – you get better every time you get out there,” says skipper Edmund Mackenzie Cooper. “Before we were simply learning how to sail a foiling catamaran, but now we are refining our racing skills.” 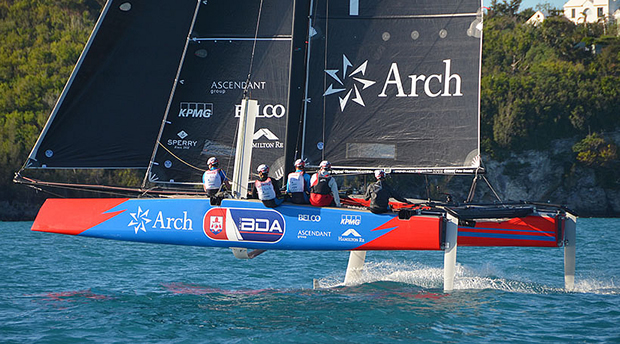 As to their crew Cooper says that, like the America’s Cup teams, they have recruited from outside sailing to find on board grunt (one of their crew for example is a swimmer, another an athlete). “We have some in our team, who haven’t sailed before – big guys who can help us muscle the boat around the course. So for two the GC32 Riva Cup will be their first regatta ever, which his pretty cool. Then we will have three others who are sailors, but who’ve never raced in foiling catamarans before. This is a big event for us all.”

Cooper continues: ““It is a long way from Bermuda, A lot of us haven’t been to Italy before. We are super excited for the chance to take part in the event. We hope to enjoy it and get a decent result.”

The 11th team due to compete at the GC32 Riva Cup will be announced on Wednesday.